PUTRAJAYA - Describing the content of nine audio recordings incriminating former top officials, including Datuk Seri Najib Razak, as a subversion of justice and institutions, the Malaysian Anti-Corruption Commission (MACC) says these were made public so that there would not be any more attempts to undermine independent bodies.

She said these were made public after MACC investigations confirmed the "absolute authenticity" of the recordings.

"There are serious issues that arose (from the conversations), including fabrication of false evidence through foreign aid and connivance, " Latheefa said.

"We want to do this revelation for the interest of the public. We do not want any more undermining of independent bodies like MACC and the Attorney General's Chambers, " she said at a press conference yesterday.

In the room packed with media personnel, MACC played the recorded conversations, which are said to have taken place between Jan 5,2016 and July 29,2016.

There was pin-drop silence as the media gave full focus to the conversations.

"The conversations took place in the midst of a serious investigation of a mega scandal and corruption that has taken the nation up for years. Here, we are listening to conversations completely undermining the institutions that it is supposed to take care of, " said Latheefa.

"In this whole sordid episode of betrayal of public trust and criminality, we can be thankful there was one brave public servant who knew his duty - and that is Tan Sri Abu Kassim, " she said.

Abu Kassim stepped down as MACC chief on Aug 1,2016 and was replaced by Tan Sri Dzulkifli Ahmad, who prior to that was a prosecutor and the head of the national revenue recovery enforcement team at the Attorney General's Chambers. He resigned on May 14,2018.Among the individuals MACC identified in the recordings were Dzulkifli, Najib's wife Datin Seri Rosmah Mansor, former Tabung Haji chairman Datuk Seri Abdul Azeez Abdul Rahim, Najib's former principal private secretary Tan Sri Shukry Mohd Salleh and Najib's former aide Datuk Amhari Efendi Nazaruddin.

Latheefa refused to say how MACC had obtained them soon after the new year began, explaining that it was "quite common" for the commission to receive information from anonymous individuals.

"We have received surat layang (poison pen letters), CDs and thumb drives - that's common. Our job is not to find out so much who gave us the information, but the content, " she said.

Latheefa has also instructed her officers to hand over the recordings to the police to investigate.

To a question, Latheefa said she did not see how this revelation would affect the former prime minister's ongoing trials.

Read Also
My signatures could have been forged, Najib tells court 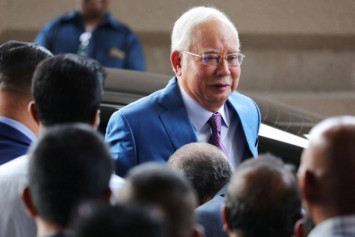 Meanwhile, Inspector-General of Police Tan Sri Abdul Hamid Bador said the police had yet to receive the recordings from MACC.

"Once we do, my officers will evaluate and analyse them before deciding on the next course of action, " he said.