Will Anwar actually succeed Mahathir as Malaysia's next prime minister?

Will Anwar Ibrahim actually succeed Mahathir Mohamad as Malaysia's next Prime Minister? That question has dominated Malaysian politics for months, and the opposition's high-flying Khairy Jamaluddin - an ex-minister who was once viewed as prime minister material - says he has had to deal with the poser even though he is now far from the corridors of power.

The speculation has risen amid whispers from within the government that Anwar, prime minister-in-waiting according to an agreement within the coalition that won last year's election, fears 93-year-old Mahathir has no plans to hand power to him.

Speaking at a conference in Singapore, Khairy, who was a key member of the defeated Najib Razak government, said the issue was top of the minds of many politics-savvy Malaysians.

"That seems the only thing that the political chattering class seems to ask me about," Khairy quipped when asked the question at the Regional Outlook Forum, which was organised by the Lion City's ISEAS-Yusof Ishak Institute.

"It has huge implications on succession planning and on stability for Malaysia simply because Dr Mahathir is the age at which he is at," the 42-year-old former youth and sports minister said. 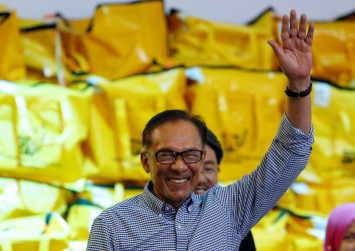 While Anwar and Mahathir have stressed their pre-election pact is intact, commentators have been unable to resist comparing the current scenario to 1998.

At the time Mahathir, then in his first stint in power, abruptly sacked his deputy prime minister, Anwar, from the government.

Anwar, 71, was jailed over corruption and sodomy charges, despite scepticism from international observers.

Upon his release in 2004, Anwar galvanised the opposition and made bids for the premiership in the 2008 and 2013 polls - failing both times by close margins.

He was once more jailed in 2015, this time during Najib's tenure but again over a dubious sodomy charge.

The opposition triumphed in last May's polls after Mahathir, at age 92, crossed the aisle and allied himself with arch-enemies such as Anwar in a bid to defeat the scandal-tainted Najib.

With his long history of being within touching distance of the premiership but never attaining it, his political prospects are sometimes a matter of dark amusement in Malaysia.

Khairy, the opposition politician, invoked some of that humour when asked about Anwar.

"Prince Charles and Anwar are the longest, you know … " Khairy added, trailing off as the audience lapped up the joke comparing the Malaysian politician with the long-serving British crown prince.

He was also asked if there were people actively plotting against Anwar. Kishore Mahbubani, a high-profile Singaporean former diplomat, wanted to know if Mahathir's stalwart ally Daim Zainuddin and Azmin Ali, a cabinet minister, were among these conspirators.

Azmin is a long-time Anwar loyalist who helped set up the democracy icon's Parti Keadilan Rakyat (National Justice Party) when he was jailed in 1999, but there have been signs of increasing friction between the two in recent months.

Responding to Kishore, Khairy said: "I think you could be right. There is a lot of chatter to say that there are some people around Dr Mahathir who still remain uncomfortable with Anwar."

But while he described Anwar as someone with various shortcomings including being "outdated" and "somebody who has not had a job for 20 years" (because of his two jail stints), Khairy said the older politician was still the best bet to lead Malaysia after Mahathir.

This, Khairy said, was because of Anwar's ability to appeal to Malaysians across the spectrum amid a rising tide of identity politics in the Muslim-majority country, an "advantage … that nobody else has".

"As long as identity politics remains an important marker in Malaysian politics … I think possibly Anwar in Pakatan Harapan is the only person who can manage to navigate around identity politics and prevent it from becoming something that is uglier than it potentially could be."

Anwar said there was "no issue whatsoever" between Mahathir and him, adding that they had "agreed on the process and succession plan".

He said the national leadership had to be "on guard" against "forces that would like us to fail".