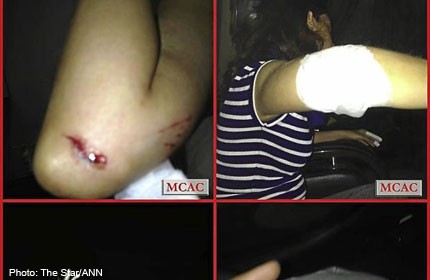 PETALING JAYA - Walking along a main road in Bangsar during broad daylight, the last thing Tina (name changed) expected was to be grabbed from behind with a knife held to her neck.

The traumatised 28-year-old legal adviser said she was approaching the junction of the Jalan Maarof traffic lights near the Saidina Abu Bakar As-Siddiq Mos­que when she was attacked at 6pm last Friday.

"I could feel the knife although I couldn't see it under my collar. I fought him off with both hands while screaming at him," she said, adding that her attacker, who looked foreign, had been in a grey Toyota Vios.

Her case, described as an attempted kidnapping, was posted on the Malaysian Crime Awareness Campaign Facebook page and was shared 531 times as of 6pm yesterday.

She said her attacker had not attempted to grab her handphone or handbag and he and his accomplice had made an illegal U-turn and sped off towards the city centre after the failed kidnapping attempt.

Shockingly, Tina said no one had really tried to help her although several cars stopped at the red light.

A couple in a black Toyota Alphard finally came to her assistance and took her to the Pantai Hospital Kuala Lumpur, as well as calling a policeman to record her statement there.

They told her they had made a U-turn after spotting the incident from the other side of the road.

"When I asked the police to check for CCTV footage of the car, I was informed the CCTV was under the jurisdiction of the Kuala Lumpur City Hall and that it wasn't working," she said, adding that her case was now being followed up by a CID officer.

Malaysian Crime Awareness Campaign founder Mark, who only wants to be known by his first name, said there were more than 40,000 followers on the page.

The 39-year-old businessman said his team would verify the crime incidents they heard about, including checking for police reports and speaking with the source of the stories, before sharing it on the page.