Would you go into Penang's scary War Museum? 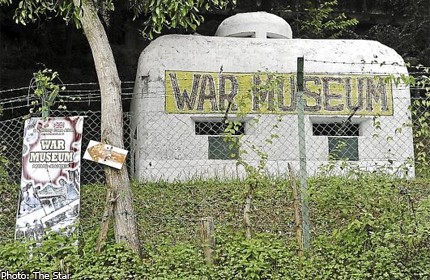 BALIK PULAU - It's fright night in Penang! The War Museum in the state has been listed as one of the Top 10 Most Haunted Sites in Asia by the National Geographic Channel.

A production team from the channel was in town in May to film a documentary at the museum, known locally as Bukit Hantu or Ghost Hill, said Penang War Museum chief executive officer Johari Shafie.

"They came to uncover our collection of historic accounts on this important historical site in Asia and to inspire a renewed interest in honouring our past," he said.

"We are honoured and proud that our museum could bring out the ghostly feeling," he said in a statement.

The museum in Batu Maung will be featured in a National Geographic documentary series called I Wouldn't Go In There.

The documentary is expected to be shown at 10pm on Aug 23 on its Asian network (Astro Channel 553).

According to the state tourism official portal - www.visitpenang.gov.my - the museum's dark past and eerie atmosphere had "earned" the place in the list of Asia's most notorious haunted spots.

Other spooky places include the abandoned Tat Tak School in Hong Kong, Kadena Air Base in Okinawa, Japan, and an abandoned hospital at the Clark Air Base (the Philippines).

Penang Tourism Malaysia deputy director Logi Dhasan said the museum had become another icon in Penang with the listing by the National Geographic channel.

The Penang Spooky Tour in the War Museum is set to be re-launched for the second year running on Aug 23, Logi said.

Held in conjunction with the Hungry Ghost Festival, those who sign up for the package will have a chance to experience a night tour of the museum besides spending a night there.