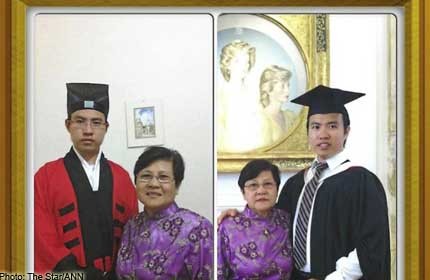 Like other Gen Y-ers, the 22-year-old UK graduate loves pop music, watching movies and hanging out with friends.

Lee, however, is not your typical young professional - while he works as an opto­metrist, he is also an ordained Taoist priest who has been conducting temple rituals since he was 19.

For the Zhongyuan Festival (commonly observed in Malaysia as the Hungry Ghosts Festival), the part-time priest has his hands full trying to juggle his day job and requests to conduct rituals.

Lee belongs to a new breed of educated, tech-savvy young priests who are bringing Taoism to the 21st century by using modern advancements to share the faith.

Despite growing up in a borderless world alien to the Taoist masters before him, Lee stresses that the "precious knowledge and culture that have been passed on for thousands of years" must never be neglected.

He credits the Internet for helping him access ancient Taoist canon and scriptures which he would otherwise have to pay a princely sum to obtain. A set of Taoist canon, he adds, consists of 49 thick volumes and costs about RM8,000 (S$3,000).

"I always surf the Net for the latest updates on the religion. Maybe the only difference (from my peers) is that I study Taoism instead of play online games," he muses.

The main difference between the older and younger priests is that the former are more "isolated", he feels.

"By using advance communication techno­logy, discussions and study can be done easily. We can share our knowledge and experience no matter which country we are in.

"Thus, us youngsters are a more integrated community," says Lee, who was ordained before furthering his studies in Cardiff University, Wales.

"My mum says I had a strong interest in praying from an early age. I wanted to be a priest to explore and pass on Taoist practices to others," he says, adding that he finds the teachings enriching as it covers everything from solemn ceremonies to classical Chinese music, literature, calligraphy, history, philosophy and healthy living.

The Bachelor of Science graduate cites old Chinese language as the main obstacle in understanding the scriptures.

It also takes time to comprehend the rituals and calligraphy, he says.

Over the last three years, he has performed numerous rituals, which include sending devotees' wishes to celestial beings and confessions to mitigate misfortunes.

"The Jade Emperor's birthday celebration on the 9th day of the first lunar month was the most special ritual I have conducted so far. It was held in the UK. Many Malaysian students attended the celebration," he recalls.

Although they think he's "special", his buddies don't treat him any differently.

Short of calling him "holy", his friend Low Yu Seng describes Lee as "upright and trustworthy" because of his strong religious beliefs. "His room is full of Taoism books and calligraphy. He is very pious and follows all the prayers diligently."

Lee says modern priests should not limit themselves to conducting rituals. They must also understand and be able to explain the meaning of the Taoism rituals and teachings.

"Youngsters should participate in religious events and learn the teachings. This will prevent teenagers from developing bad habits while cultivating good moral values," he opines.

Gan Huat Beng, too, found his passion for Taoism in his teens. The 36-year-old Penangite is a third generation Taoist priest.

Four years ago, he established Hian You Altar and is using the Internet to promote his services.

Unlike his father and grandfather, Huat Beng is putting a professional spin to his vocation.

"I started a Facebook, blog and website to make it convenient for people to contact us. I think these technological tools are a necessity now unlike before.

"In the old days, people on bicycles would come to our temple to engage my family's services but it's no longer convenient to do so.

"It's so much easier to have the details of our services published online so people can just check the types of ceremonies we conduct and the costs involved with the click of a button," he points out.

In their place are neatly printed copies filed systematically.

"In the old days, wakes can be quite scary and dark. Light and sound effects can evoke a very different atmosphere," he says.

Like all Taoist priests, he wears elaborate robes when conducting a ceremony and insists his staff look smart too.

"I introduced collared uniforms for the employees to project a more professional image," he says.

Sharing how he got started in the family trade, he recalls how at age 13, he would tag along with his father to work.

"I helped get the altar ready and arranged the prayer paraphernalia but never studied the prayer books. After finishing school, I tried my hand at various jobs. I didn't choose to become a priest but somehow ended up as one - perhaps it was fated," he shrugs.

He says being a priest is no different from any other job as "we charge for our services too".

He, however, feels an added sense of obligation.

"Being a priest is about more than earning a living. I am helping the dearly departed walk a good path to another realm and that's important," he explains.

His father, Kee Eng, 71, is a famous priest who constantly travels to conduct religious rituals as far as the Philippines.

The proud father, however, believes Huat Beng is doing a better job than him.

"The prayers and traditions I've passed on to him completely. He followed me around to conduct religious ceremonies for six years - the same amount of time I took to learn from my father.

"Huat Beng is actually better than me now because he has a booming voice and is stronger than I am," he quips.

He observes that there is a young crop of Taoist priests making their name but says most still lack knowledge.

Lineage, he adds, is important because the religious knowledge is handed down from generation to generation.

"Yes, you can study to be a Taoist priest but unless it runs in your family and the wisdom is taught by your elders, it is unlikely for you to master the skills 100 per cent," he opines.

Like Huat Beng, Methodist Boy School ex-student Lim Siew Hong, 32, was born into a family of Taoist priests in Penang.

Whenever his friends need any (religious) advice, they see him.

"My grandfather was a Taoist priest who came from China and settled down in Penang in 1930.

"Since young, my father has taught me the traditional Chinese Taoism ceremonies and rituals. After finishing school, I became a priest to assist him," he says.

This August, the seventh month in the lunar calendar, is the "peak period" for Taoist priests, young and old alike.

Taoist Association of Malaysia (TAOM) president Prof Dr Yam Kah Kean says that in Taoism, the 15th day of the seventh lunar month is not Hungry Ghost Festival, a common misunderstanding the association is trying to clear up.

"In Taoism, it is the Zhongyuan Festival or Mid-year Festival. On this day, Taoists pray to Di Guan (Earth Officer), not the 'Ghost King'.

"During the festival, Taoists confess and repent. We also pray for our ancestors."