Male teacher accused of pinning boy down while grabbing neck 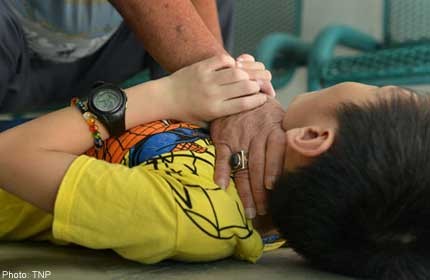 A Primary 6 pupil was allegedly dragged into a classroom by a teacher who then pinned him down on a table while grabbing his neck.

The boy managed to wriggle free and ran out of the classroom.

But the teacher allegedly chased and caught him, then dragged him into another classroom and pinned him down again.

The boy's mother, who had just dropped her son off, did not see what happened in the first classroom, but she saw her son running out and being chased by the male teacher.

She followed them to the second classroom, and when she saw what was happening, she rushed forward to stop the teacher.

The teacher immediately walked off without saying a word to her or to her son, the mother told The New Paper yesterday.

The incident allegedly occurred at a top school in the east last Tuesday.

The mother, who called the TNP hotline, said in Mandarin that the incident left her son with a "minor head injury", which was mentioned in a medical certificate issued by KK Women's and Children's Hospital (KKH).

She said her son sustained the injury while struggling to break free from the teacher's grasp.

"He tossed and rolled, and knocked his head on a table in the classroom," she said.

"Immediately after the incident, I took him to the toilet, where he complained of giddiness and threw up."

She took her son to KKH, but he was well enough to be sent home. But he complained of headaches and giddiness that night and was admitted into KKH for three days.

The parents said their son's class teacher visited him in hospital, with a handwritten card from the school's principal.

The father, who was also present during the twohour interview with TNP at Marine Parade Community Centre, said in Mandarin: "I don't understand how a teacher can treat a child like that. Our son has given him no reason to be violent.

"This is completely unacceptable. My son has asthma. The teacher knew this and he still pressed him down by his neck."

During the interview, the boy shied away from most of our questions. He answered only after cajoling from his father.

His mother said that on the day of the incident, she had sent her son to school at around 10am, about 2½ hours late, because he was not feeling well.

When they arrived, she headed to the general office to explain why her son was late and the viceprincipal told her that it was okay and to take the boy to his class.

As she was leaving, she heard his science teacher scolding him for being late. She said her son kept quiet and started sobbing before going into the classroom.

She said her son later told her that the teacher had then pulled him to another room, where he was pinned down.

The father said his son is very shy and has trouble expressing himself, and this was why the teacher, who started teaching the class this year, had been picking on him..

"My son tells me (the teacher) always sends him out of the class," he said. "Just because my child is poor at expressing himself doesn't mean he should be subjected to abuse or bullying."

He was also at pains to point out that his son is doing well in his studies and showed TNP the boy's academic award for topping his class in mathematics for the mid-year examination.

The parents said they made a police report about the alleged rough treatment that day itself. A police spokesman confirmed they are investigating the incident.

The boy has not returned to school since the alleged abuse.

Said his mother: "He's been afraid to go back since the incident. We spoke to the principal, who promised that he would investigate and settle the matter.

"As a father, I have to do something. I hope my son can have justice for what's happened.

But the parents insisted they did not blame the school and requested that the school not be named.

"We don't want to damage the school's reputation.

We just want an explanation from the school and action to be taken against the teacher," the father said.

He also hopes that his son would not be victimised as a result of this incident.

When contacted, the school's principal replied in an e-mail: "The school is in touch with the student's parents and is investigating the incident."

A part-time teacher at NTUC My First Skool was arrested for mistreating a three-year-old boy.

The incident was caught on CCTV. The child suffered a hairline fracture on his shin bone from the alleged rough treatment.

The childcare teacher was sacked "with immediate effect", a spokesman for NTUC First Campus said on Monday. She is out on bail pending investigations, said the police.

TNP broke a story yesterday of another possible case of abuse in an educare centre, with its principal accused of yelling at a primary schoolboy, slapping him and pushing him against a wall.

The incident happened in April.

The principal allegedly made the boy stand in a corner with a cardboard box covering his head for more than three hours, said a source close to the school.

The principal denied the allegations and said her godson had put the box over another boy's head as they "were playing around" when the photo was taken.

A former kindergarten teacher from a PAP Community Foundation Education Centre was charged with illtreating a child under her care and using criminal force on her.

She is alleged to have asked the five-year-old girl to remove her clothes and stand naked in front of her classmates in a classroom.

Her case will be heard on Friday.