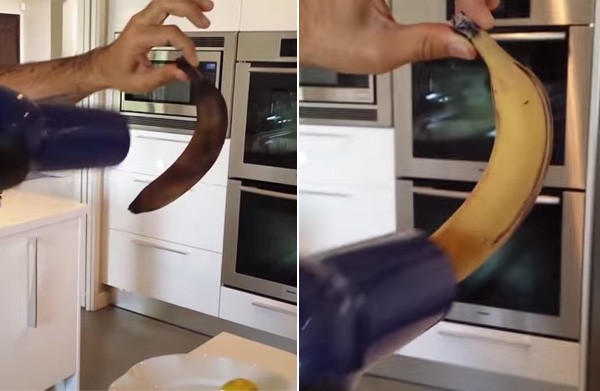 You may have seen an online video which shows a man "resurrecting' a rotten banana using nothing but some rice and a hair dryer.

The video uploaded in July last year by Brandon Queen has been viewed more than 2 million times on YouTube and widely-circulated on social media.

In the video, Brandon claims to be able to make a rotten banana fresh again. The blackened banana is first steeped in some rice in an air-tight bag for about an hour.

Brandon Queen's explanation for this is that the rice helps to "pull out any excess moisture from the banana," Snopes.com reported.

Then, using a blow dryer, Brandon applies a little heat on the banana.

Miraculously, as the warm air sweeps over the banana, the fruit's blackened exterior fades and it regains its yellow hue.

He even peels the 'resurrected' banana back with a snap to reveal perfect-looking flesh and takes a big bite.

The amazing feat looked highly believable, but is it real? Unfortunately not, according to the people behind rumour-busting site Snopes.com.

Although Brandon offers scientific-sounding phrases such as "retro-fermentation" and "thermogenesis" to explain the phenomenon, "there is nothing scientific about it. You can not resurrect a rotten banana with rice and a hair dryer," the site reported.

A YouTube user, Crystal Philips, tried to recreate the same phenomenon, but ended up with the same icky banana she started with. Understandably, the fruit ended up in the bin.

Viewers speculated that Brandon might have used a frozen banana and not a rotten one. According to food site Chow.com, a banana will turn black once placed in a freezer. As for the colour change, some suspected that the video may have been digitally manipulated.

Still uncertain? Best to try it out for yourself.