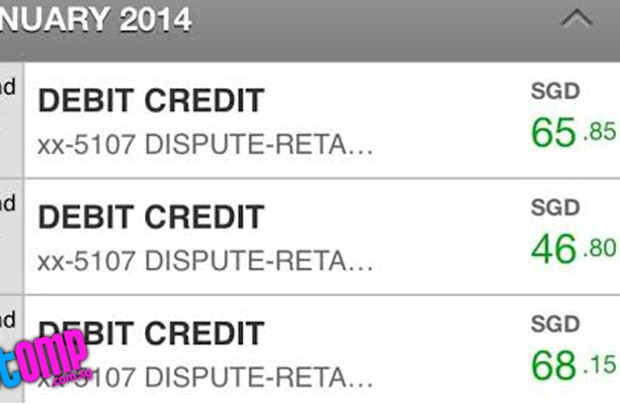 Stomp reader N said that a man spent $180 on McDonald's food through unauthorised transactions made from her debit card.

The reader had called her bank to check why the amount was missing, and was told that three separate transactions were made, using her card details, to purchase fast-food items.

She believes her card details may have been leaked because she had made online payments for her bills.

She elaborates: "On Jan 1, I happened to log in to my OCBC online banking account and found out that I had $180 missing, judging from the available balance and the amount oold (which I usually do not see).

"I called OCBC immediately and asked them what happened. Upon checking, the staff told me that it was three separate online transactions to a merchant, McDonald's which totaled up to $180.

"Obviously this was an unauthorised transaction and my card was with me all the time. The staff told me he will monitor the transactions for me and at the same time deactivate my current debit card.

"And he told me he will get back to me within three days. Three days later, the staff told me that after deactivating my card, there is another transaction of about $40 charged to my card from Mcdonalds again.

"But fortunately it was to no avail because my card was cancelled. This was proof to show that the previous transactions were indeed unauthorised.

"And so, OCBC promised to credit the money back into my account as soon as I filled up a Dispute Transaction Form. It was quite efficient of OCBC as I can say as I got back my money on Jan 25 which was faster than I expected.

"On Jan 28, I received a letter from OCBC containing the three transaction information. The information contains the items that the person ordered from McDonald's, his name, his contact number and his address.

"Using his contact number, I managed to found out his photo by adding his WhatsApp. The chap could have hacked into my debit card and purchasd $180 worth of McDonald's.

"I do not know what is his intention of doing this, but I hope he will be so poor for the rest of his life begging for food and starves to death eventually. What goes around, comes around.

Everybody, be extra wary of your debit cards, don't let your hard-earned money be easily used by other people."