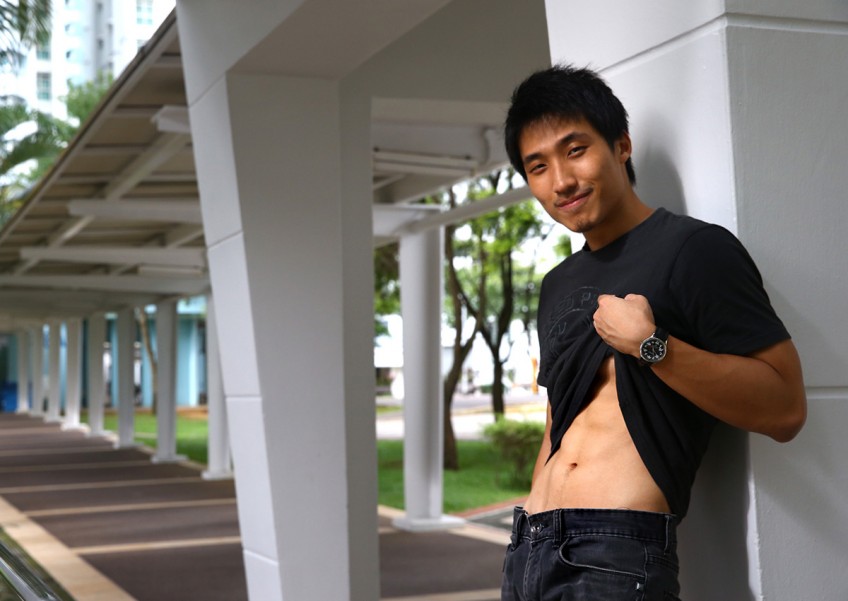 These are words anyone would use to describe personal trainer Zermatt Neo, 28.

With rock-hard, six-pack abs, you might be surprised to learn that he is also a competitive eating champion.

And the Singaporean has become an online sensation because of it.

Photos of him polishing off a hefty near-4kg portion of chicken rice - 10 servings of rice and a whole chicken - in slightly over 29 minutes were uploaded onto the Facebook page, Food League Singapore, which specialises in organising eating competitions.

The post of the challenge at a Bukit Batok coffee shop last Wednesday has been shared at least 5,000 times.

Mr Neo also uploaded a video of his feat on his YouTube channel.

His channel is filled with videos of his competitive eating experiences, including gobbling down, in separate sittings, 150 sticks of satay at Lau Pa Sat, 100 gyozas at home and 50 chicken wings at WingStop - all to challenge himself.

Since it was uploaded on Jan 29, the chicken rice video has received over 76,000 views.

Mr Neo told The New Paper: "I was doing this challenge just for my YouTube channel when someone took a picture and posted it on Snapchat. It must have also been sent to Singapore humour site, SGAG, where it just went crazy.

"I was shocked because it started blowing up just an hour after we filmed it. I didn't expect it at all."

Since then, many people have sent inquiries about the mega chicken rice to Food League Singapore which then decided to organise a challenge for its Facebook followers keen to beat Mr Neo.

Mr Neo said he got into competitive eating when he took part in the Ramen Champion's Ramen Big Eater Challenge in November 2013.

Mr Neo entered the competition only after his friends egged him on.

"I was quite happy after the contest because I beat Ng Chin Seng, who was the reigning competitive eater in Singapore for a while," said Mr Neo, who has since entered over 20 competitions and even travelled to countries such as Malaysia, Thailand and the Philippines to compete.

On a high from his first win, he signed up for the Pepperoni Pizzeria XXL Pizza Eating Challenge 2013 two weeks later, where he ate a 21-inch pizza in 16 minutes and bagged the top spot.

"That was when I thought to myself, 'Hey, this is something I'm really good at. Maybe I should continue doing this.' I love food after all.

"I joined about four to five other medium-sized competitions and finally went for an international competition in Manila," he said.

That was the Yoshinoya Gyudon Eating Contest 2014, where challengers tried to finish the most number of beef bowls in 15 minutes.

"Most of the time, I don't even know what the prize is. I do it for the fun of it and bragging rights."

While he trained for the gyudon challenge by eating the dish in his own mock competition, Mr Neo said he doesn't have any special training other than increasing his food and water intake two days before a competition to help expand his stomach.

"I do not eat like this daily - 90 per cent of the time, I stick to a responsible diet with vegetables and lean protein. I restrict myself to one eating challenge a week," he said.

He gets curious looks when people find out he's a personal trainer.

"Everyone tells me it's ironic, being a personal trainer and also a competitive eater are total opposites.

"But because I am a personal trainer and have knowledge in nutrition, I can deal with the aftermath of my binge eats and challenges.

"Some of my clients found me through my YouTube channel and they engage me because they want to learn my tricks - how I stay lean while eating the way I do," he said.

But Mr Neo doesn't encourage others to take part in competitive eating.

"It is pretty high risk and you can choke and feel sick. I've learnt a few tricks to make it easier for myself, like taking small, quick bites and washing it down with water," he said.

"But vomiting and competitive eating go hand in hand. Sometimes your body goes into shock and just can't accept all the food you've eaten."

When Mr Neo's parents first found out that he was joining eating competitions, they feared for his health and were worried that he would choke.

"After seeing that I know how to take care of myself and my body, they've become pretty supportive," he said.

If there's one type of food he fears in eating competitions, it's meat.

"Protein is extremely dense, making it hard for me to scarf down something that contains a lot of meat," said Mr Neo.

You think you can eat 4kg of rice?

Seven contestants - two of them women - will try to down the near-4kg portion of chicken rice today.

If they can finish the portion within 40 minutes, the meal will be free and they will also receive a $50 shopping voucher each. If they beat Mr Zermatt Neo's 29-minute record, they will each win $500.

Xiang Ji Roasted Delights owner Mervyn Koh, 28, said: "I've never seen anyone take up such a challenge and eat such a huge amount of food. I think competitions like these are creative.

"It's also a good way to attract younger people to hawker centres to enjoy our local fare."

Mr Koh added that sales have increased 30 per cent since Mr Neo's video and photos were posted online, with customers even asking for the "mega chicken rice".

"About two to three groups of customers each day have asked for the mega chicken rice since that post went viral. We are selling it for $28," said Mr Koh, who came up with the dish for Mr Neo's personal challenge.

This article was first published on Feb 3, 2016.
Get The New Paper for more stories.