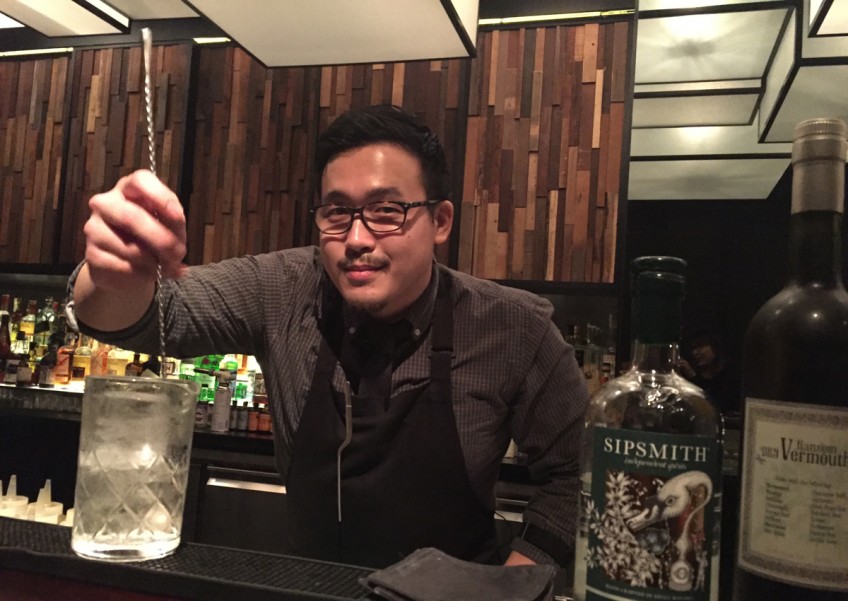 This is what MasterChef Asia winner Woo Wai Leong asks us, by way of welcome, at cocktail bar The Horse's Mouth.

While viewers are used to seeing the 27-year-old from the reality TV cooking show preparing fancy dishes in the kitchen, he is equally comfortable shaking cocktails behind the bar.

The trained lawyer has been working at that bar for the last five months. "This gig is part of who I am right now," he said. "So I'll continue doing this for a while.

"When you're in F&B, it's only natural to have knowledge of both food and beverages if you want to be well-rounded."

While training to become a lawyer, Woo worked part-time as a bartender in places like L'Aiglon. He chose bartending over barista training because he "didn't want to get up so early".

His shifts typically last from 4pm to 1am, and he often goes home past 3am.

Woo is excited to be part of the "cocktail boom" in recent years, where craft cocktails have become popular. Still, he does not have a signature drink, and prefers to serve classic cocktails with a twist.

"Since I won MasterChef Asia, I notice that my guests are more willing to try different drinks because they recognise me," he said. "So I use that to my advantage and persuade them to order drinks I like to make," he said cheekily.

Still, he denied he gets more female attention as a bartender and a MasterChef Asia winner.

"Honestly, I treat all my guests the same," he said.

As Asia's MasterChef champ who beat contestants from around the region in the inaugural season finale on Dec 10, Woo's prizes included US$50,000 (S$70,300) and a chance to publish his own cookbook.

The MasterChef Asia repeat telecast will be aired on Lifetime (StarHub TV Ch 514) daily from 11am to 2pm till Jan 2.

Though planning for the book is still in the early stages, he's excited by the prospect and has a vision of what it should look like.

"It would be great if my face wasn't on the cover, but somehow I don't think that will be possible," he said.

His own cookbook collection includes those by his favourite restaurants like Relae in Copenhagen and St. John in London, and chefs such as Marco Pierre White and Justin Quek.

"I'm waiting to have that autographed someday," he says of local chef Quek's book.

"Overall, I prefer cookbooks put out by restaurants. I think the days of celebrity chefs publishing books under their names are ending, as the trend is now focused on restaurants and their teams."

As to having his own restaurant, Woo admitted it was expected of him but he is in no hurry to start one.

"I think opening my own restaurant next year is unrealistic; I wouldn't call it a safe investment. Who is going to follow someone who just won a cooking competition? The attention I get now is limited. If there is a second season, the spotlight will shift to the new winner.

"But I'm still focused on F&B. I'm not planning to go back to law, even as a backup plan. Even if you fail in this industry, if you really want to do this, you'll pick yourself up. It's not good to have too many options."

Woo plans to build up his repertoire next year, working on his cookbook and hopes to travel to Europe for culinary inspiration. He is also considering a food pop-up with fellow MasterChef Asia contestants like Singaporean Lennard Yeong.

"I did manage to keep this year's resolution, which was to cut down on diet soda - the aspartame in it was affecting my taste buds - so hopefully, I can keep next year's too."

This article was first published on December 30, 2015.
Get The New Paper for more stories.