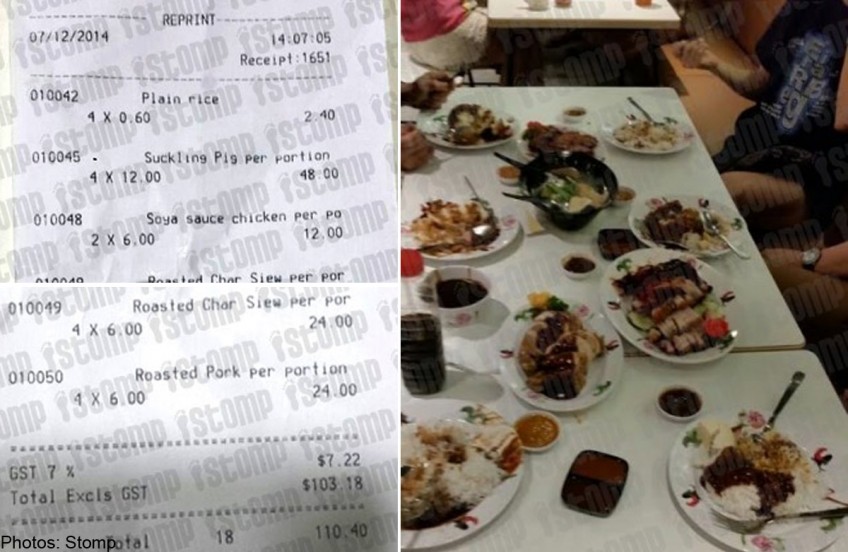 SINGAPORE - A plate of roast meat, another of pig skin and two drumsticks for four people allegedly cost $110, shocking the patrons who bought the overpriced meal at Seletar Mall food court.

A Stomp contributor wrote in to the citizen journalism website said that his mother witnessed the incident, which resulted in a commotion in the food court on Dec 7.

In a phone conversation with Stomp, the Stomp contributor said: "My mother and aunt witnessed this incident at about 3pm at the new Seletar Mall food court.

"Customers sitting right beside them ordered three plates of food items and these consisted of a plate of 'char siew' and 'sio bak', another plate of pig's skin and another plate containing two pieces of drumsticks.

"This meal, including four plates of rice, set them back slightly over $110.

"They ordered soup as well, but this was from another stall.

"The uncle initially paid the amount, but realised soon after that it was very pricey and demanded an explanation from the stall assistants.

"He was told that the price was $12 per person for each portion of roasted meat and pig's skin, thus amounting to $96. The individual portions were placed on a larger plate for sharing, as you can see in the photo.

"As for the chicken drumsticks, it was priced at $6 per piece.

"The uncle then demanded a refund of at least 50 per cent off the tab, but they offered him only a $20 refund.

"There was a commotion at the food court over this matter and in the end, the uncle left without taking the refund.

"I've asked around as well, and all my friends think the meal is overpriced."

What do you think of the cost of the meal? Overpriced or reasonable?