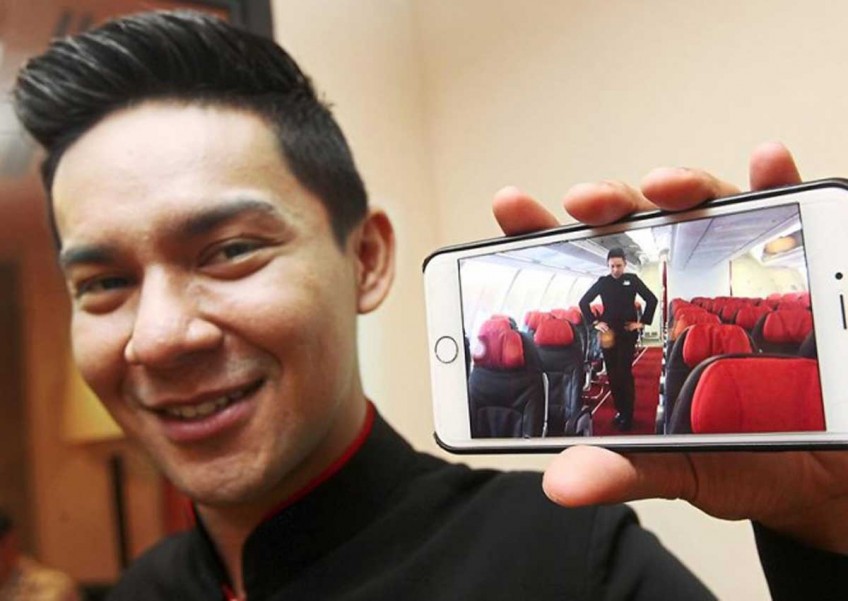 Assraf Nasir has just touched down in Kuala Lumpur the morning we are supposed to meet for this interview in Menara Star, Petaling Jaya, Selangor.

He had been on an eight-hour flight from Melbourne, serving drinks and entertaining passengers' requests. Just another day at work for a flight attendant.

But the 29-year-old is not your run-of-the-mill cabin crew. The KL-ite recently became a worldwide Internet sensation, thanks to him nailing Britney Spears' Toxic dance moves in an empty AirAsia X plane.

Originally posted by Assraf's co-worker, the video has amassed almost 7,000 retweets at press time. It gained traction after being re-posted on the 9GAG Facebook page, with the last reported figure being over nine million views!

Since then, international media like Billboard, People, Time and CBS New York have picked up on Assraf's sassy dance moves. He's still wrapping his head around being an overnight viral success story.

"I don't think I'm famous," he shyly offers before going live for a shoot with Star2.com, "I'm just a guy who did a dance video."

Dance, he certainly did. In the one-minute clip, Assraf breaks into Spears' fierce choreography and shimmies down the aisle with a beverage cart.

"I'm Britney's number one fan. I've been a fan since high school, ever since I first heard Baby One More Time," reveals the guy who joined AirAsia X's cabin crew in July last year.

If anything, creativity is ingrained in Assraf. Prior to joining the airline, he was a performing arts teacher and captain of a cheerleading team (which represented Malaysia and clinched golds at the National Cheerleading Asia Championship in 2014).

He has even performed in the third season of Puteri Gunung Ledang: The Musical as part of the entourage seeking an audience with the mythical princess, alongside big names such as Datin Tiara Jacquelina and Stephen Rahman-Hughes.

Star2 finds out more about the fun guy behind the dance moves.

What inspired you to film that video of you dancing to Britney Spears' Toxic?

Take us through the behind-the-scenes process of making this video.

My colleague and I actually filmed this in the plane in Taipei. We were transiting there for one hour. After we were done cleaning up the cabin, we were like so bosan (bored). Then my friend suggested we do something to pass the time. That's pretty much how the video came about (laughs).

Tell me about that moment when you found out that the video had gone viral online.

One of my ex-colleagues forwarded my CEO's (AirAsia group CEO Tan Sri Tony Fernandes) post on Instagram. He was like, "OMG, babe, you're famous." I was quite nervous because the video was only initially shared among my batch mates before I gave permission for it to be shared with other AirAsia staff on our internal communication board. My big boss asked for a copy to be sent to him. Later on, I found that the video had thousands of retweets on Twitter (shared by my friend and colleague).

Do passengers now recognise you from the video?

After the video went viral, I was actually away from work for three days. But when I was in the Melbourne flight back to KL this morning (March 29), a passenger recognised me and said that he enjoyed the video.

How has being an overnight Internet sensation impacted your life?

I don't think I'm affected much by it. My Instagram followers have increased by over 10,000, though.

In the video, we see some of your nifty dance moves. Can you sing, too? If yes, what's your favourite song to sing?

Yes, I can (laughs). My favourite songs to perform are Oops!… I Did It Again, Baby One More Time and Overprotected by Britney Spears. But these days, I find myself singing a lot to Ed Sheeran's Shape Of You. It has a very catchy tune and the melody is very unique.

What is it about Britney Spears that makes you a fan?

She's a dancer and a gymnast - just like me. I admire how whenever she performs, there is something new. My dream is to see her perform live one day. She's actually heading to Manila in the Philip­pines on June 15 this year. I'm saving up some money now to watch her perform there.

I understand you are a big fan of Datuk Siti Nurhaliza, too. What do you like about her?

Datuk Siti has always maintained her humbleness, from when she first started in the business until today. She's very sopan santun (polite) and the way she dresses too is very nice. I had the opportunity to dance for her once. She's not the kind to complain.

If Britney Spears and Datuk Siti Nurhaliza were to do a mash-up, which of their songs would you pick?

Overprotected and Ku Milikmu. They sound about the same.

Why did you decide to be a cabin crew?

I love to travel and, as a cabin crew, you get to travel for free. Some of the places that I have travelled to for work are Melbourne, Perth, Sydney, Tehran, Haneda (Tokyo, Japan), Incheon (South Korea), Kansai region (Japan), Beijing and Shanghai.

Even though you're at a destination for only a short period, there's still time to explore. Usually, with the 24 hours given, I'd go shopping and sightseeing at interesting places I found on Google. I love desserts, too, so I'll try to look for some nice dessert places during this short period.

I get to meet new people every day at work because the crew is always changing. And sometimes there are passengers who share their stories with me and I get to learn all about their culture.

Any interesting experiences as a cabin crew, apart from this viral video?

I was doing the Singapore route once and travel host Henry Golding was on board. But when he came in, he straight away fell asleep. Feeling bad for him, I saved some peanuts and wrote a note. I took a photo of that note and tweeted it. When I was back home, he replied my tweet, thanking me.

What are some good habits of passengers that you like?

When they request for everything in one go (laughs).

What advice do you have for travellers to have an enjoyable flight?

Check in early and always have a light snack before you board the plane. Wear comfortable T-shirt and sweat pants, sandals and always bring eye shades. And also remember to pre-book your meal. When the meals finish, we're the ones who always kena marah (get scolded).

Apart from an empty plane, what other places have you danced at?

My friends and I have danced in the middle of an aisle of a supermarket. We always do all these crazy stuff together (laughs).