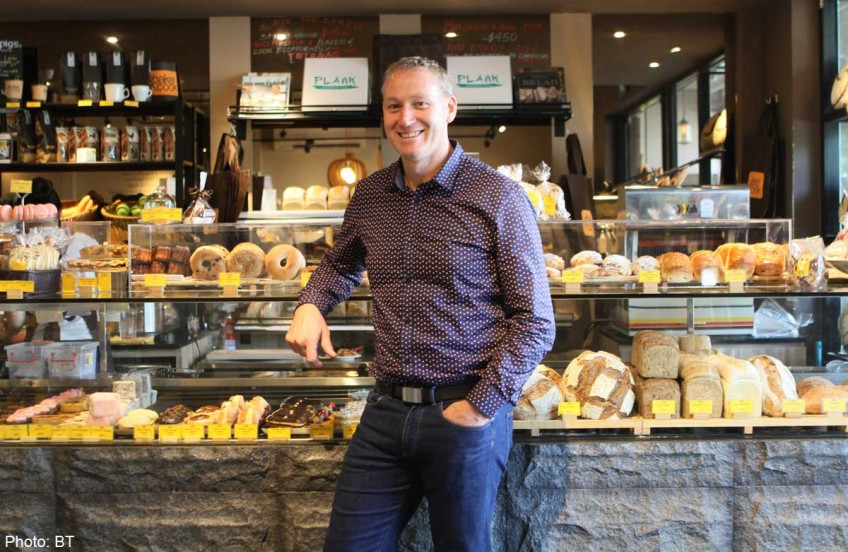 The idyllic atmosphere in Chip Bee Garden belies the snazzy array of retail and food outlets it boasts. One of these - with its alluring rows of doughnuts and loaves of bread - is especially packed, even on a sleepy Monday afternoon.

The 46-year-old New Zealander draws a comparison between his homeland and Singapore: "They're both young countries filled with many cultures. By that definition, you're immersed in all of them."

His exposure to cultural vibrancy is reflected by his firm belief in "new world baking" which, to him, represents the best of baking from around the world. The bakery has baguettes, croissants and other specialities inspired by regions around the world.

Occasionally, Mr Brettschneider gives them what he calls his "Dean twist". "Sometimes, I leave them exactly like they came out of France, for example." He takes special pride in his selection of products, one that is large and constantly evolving. "What makes us successful is the range we're able to provide. It's very important for us to keep innovating and be creative, because that keeps my customers interested and my business alive."

Baker & Cook is not a cafe, Mr Brettschneider insists, as it "does not stray from its knitting".

"We're a bakery. You don't see soup and burgers here. If you use the word 'cafe', people will start expecting a flipped bakery with coca cola. We do have salads, though, to accompany our pies."

Even though he is based in New Zealand, Mr Brettschneider is "everywhere in terms of baking".

"It was because of the Global Baker brand that I was travelling a lot, and I saw that it's not so much about the products than it is about the experience and the products combined."

Some 50 per cent of Baker & Cook's success can be attributed to "product", while the remaining, to "experience, design, staff and the right vibe", he says. For this reason, he has chosen to cater to a specific clientele - families and neighbourhoods - rather than the hustling crowds in areas such as the Central Business District (CBD).

Bakeries have historically revolved around the family, says Mr Brettschneider. "They're about relaxing and enjoying yourself. When you're right in the heart of the city, it's stressful and expensive."

In response to customers' requests for the chain to set up shop in Singapore's east, Mr Brettschneider spent three years finding what he calls the right location - one that falls in line with his philosophy and makes business sense. "It's easy to go to places like Katong, Siglap, Joo Chiat Road, but all that struck me was the sight of shopping streets."

Invasive, though, the chain is not. Rather, it is "very protective of the neighbourhoods", Mr Brettschneider says. "We're a neighbourhood-oriented business going into the neighbourhood, not a city-slicker wanting to throw our weight around."

For one thing, the store has no outdoor seating to minimise disturbances to residents nearby. In a bid to reduce traffic congestion, it also discourages patrons from parking on its doorstep. Patrons at the Swan Lake Avenue outlet are also in for a new savoury treat in the form of Plank Sourdough Pizza. A new concept by Mr Brettschneider, the sourdough pizza restaurant outlet - the first in Singapore - adjoins the Opera Estate Baker & Cook store.

Mr Brettschneider's interest in Singapore's neighbourhoods extends to its residents, too. His efforts to build personal connections with the stores' neighbours have included free pizzas, delivered by hand. The new pizza space, with its upbeat decor and vibrant colour scheme, has also fostered many an interesting conversation. "One of the old ladies across the street visited us one day and really liked its chairs," says Mr Brettschneider. "I offered her four chairs, which she popped into her house."

Despite his success as a baking personality, Mr Brettschneider has not let fame go to his head. "I'm just Dean, a guy baking a cake, who still cleans the floor and coffee machine from time to time."

His attitude applies to customers as well. "It's my bakery and it has my name on it. I don't want people to view me as someone who's out of touch. They should be able to approach me and say, "Excuse me, I really like that coffee" - or not. I'm no bigger than anyone else." Beyond good food and healthy customer relationships, Baker & Cook's strength lies in its staff, says Mr Brettschneider.

"Passion is indeed the main ingredient here," he says, referring to Baker & Cook's tagline. The chain hires more than 50 employees, who are trained in "both shop skills and baking skills", in Singapore. Although most are part-timers, full-time staff have also jumped on board the chain - even complete newcomers to the food & beverage industry. Melvin Tan, who previously worked in the car industry as a service and technical-adviser, is one such example.

Personally trained by Mr Brettschneider, he was then sent by the chain to Dantes Pizzeria in Auckland for an apprenticeship.

"I knew nuts about pizza initially," says Mr Tan, who is now the head chef of Plank Sourdough. "It was a 180-degree change, especially when I was working in the corporate line. I do enjoy my work though."

This year, global investor Atlantic Partners and local investor Commonwealth Capital each acquired a 20 per cent stake in the business. The chain is also looking to explore other Asian markets for international expansion.

This article was first published on May 26, 2015.
Get The Business Times for more stories.