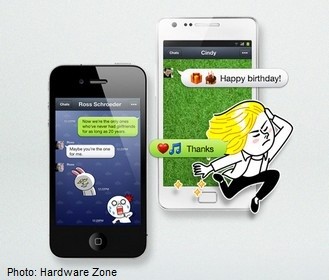 At a press conference in Tokyo, Line Corporation revealed that it will introduce three new services to its messaging app; video calls, Line Music, and Line Mall.

Line was developed in the aftermath of the Tohoku earthquake in 2011, after the Japanese communication system had been damaged. Line Corporation says that it has since reached 230 million users as of today, with 47 million coming from Japan, 18 million from Thailand, 17 million from Taiwan, 15 million from Spain and 14 million from Indonesia.

There have been over 7 billion messages and 1 billion stickers sent, and the company announced a revenue of 12.8 billion yen (approx. US$132.3 million) in Q2 of this year, a 348.9 per cent increase year on year. The company also announced that it is currently making over US$10 million per month selling stickers, and the figure is rising each month.

While the app itself is free, Line makes money by selling virtual goods, like in-game purchases and stickers. The in-game purchases form the bulk of Line's revenue, contributing 53 per cent in Q2 2013, with 2.6 billion yen (approx. US$26 million) in monthly revenue in July 2013. Line also makes more than 1 billion yen (approx. US$10 million) per month through merchandising of its recognizable sticker cartoon characters, which will be rebranded as 'Line Friends'.

According to Line CEO Jun Masuda, Line will offer video calls, music and shopping for its users as part of the company's focus on the '3Cs': communication, content and commerce. Line Music will not be a separate app, but included inside Line. Masuda says that you'll be able to listen to music and share with friends, and that the service will be made available outside Japan as well. Line Mall will introduce a new shopping service on Line.