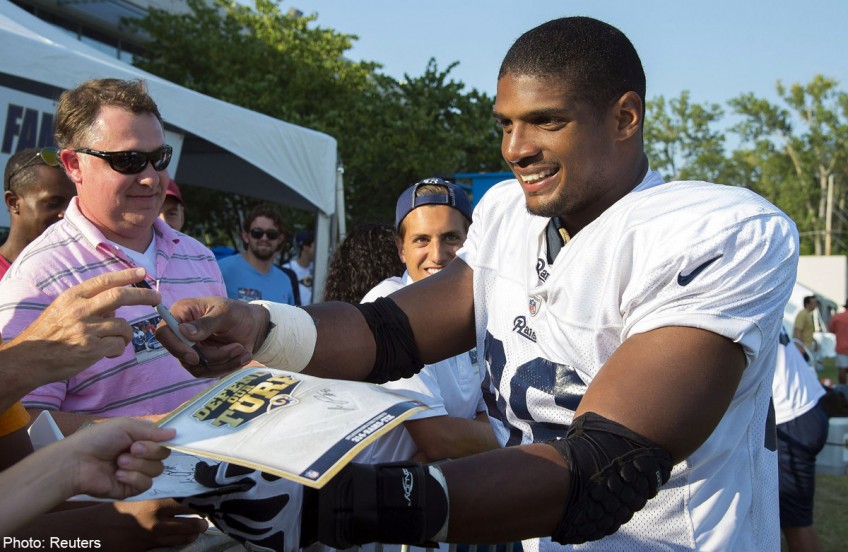 Michael Sam, the first openly gay player drafted by an NFL team, told Oprah Winfrey that he still dreams of playing in a regular season game and that he is not the only homosexual in pro football.

In his first interview since disclosing his homosexuality early this year, Sam described childhood abuse by his two brothers, and expressed surprise that other players in the National Football League were not inspired to come out as gay after his announcement.

"There's a lot of us out there," the defensive end said in the interview, part of an Oprah Winfrey Network documentary that aired Saturday. "I'm not the only one. I'm just the only one who's open."

Sam was the Southeastern Conference Defensive Player of the Year as a senior at the University of Missouri before graduating in December 2013.

The following February, before the NFL Draft, he announced he was gay. In May he was picked up by the St. Louis Rams in a late round of the draft.

The Rams cut him in August, but he was immediately picked up by the Dallas Cowboys practice team, only to be cut in October.

"There was nothing I could do," he said Saturday. "The roster was full already and I had to go."

After he came out, Sam heard from "a few" gay players who privately thanked him for his disclosure and said they wished they had that courage, he said.

"They need to come out whenever they feel comfortable for them to come out," Sam said.

Sam also reflected on a childhood filled with turmoil, bullied by two brothers whom he believes he will eventually forgive. "I was abused daily," he told Winfrey.

He recalled one incident in seventh grade, when his older brother broke his Most Valuable Player trophies out of jealousy.

Upon graduating college, he said, his mother handed him a letter from one of his brothers, but he chose not to read it.

"They made my life very difficult growing up," he said.

Sam said he would hold on to his dream of playing in the NFL during the regular season "as long as I can."

Asked whether he believes he's not on a team right now because of his homosexuality, Sam said, "I don't like to think that way."

"I believe good things are on the horizon."