Flight MH370 crashed with no survivors

Families of passengers on board missing flight wait for news

Loved ones looking for answers

MALAYSIA - A father clutches his daughter's teddy bears, a woman holds her husband's car key, a newly-wed shows off a bedroom decorated for children yet to be born. Six months on, loved ones of passengers on a missing Malaysian airliner derive what comfort they can going forward from what's left behind.

Malaysia Airlines Flight MH370, with 239 mostly Chinese people on board, disappeared on March 8 about an hour into a journey from Kuala Lumpur to Beijing in the world's greatest aviation mystery.

More than two dozen countries have been involved in the air, sea and underwater search for the Boeing 777 but months of sorties have failed to turn up any trace - even after narrowing the search area to the southern Indian Ocean - long after batteries on the black box voice and data recorders had gone flat.

The lack of news meant many families for a while clung to the hope that perhaps the plane landed somewhere safely and their loved ones were still alive.

Then Malaysian Prime Minister Najib Razak sombrely announced that, according to fresh analysis of satellite data, the jet had ended its journey in the remote southern Indian Ocean.

At the Beijing hotel where many of the relatives were staying, family members erupted in shouts and tears, in some cases dropping to the floor. "It's not possible, it's not possible!" one woman screamed before collapsing.

In many cases, dashed hopes turned to anger, with overwrought relatives turning on Malaysian and Chinese authorities, shouting at briefings and throwing water bottles, blaming them for the slow progress in tracking down the plane.

One Chinese woman told Reuters she couldn't go out without taking her missing sister's handbag with her. Another agonised over the fact that the last phone call she had with her missing husband was an argument. His tea cup stays put on a desk, now covered in dust.

The focus of investigations varied over the months after clearing all 227 passengers of possible involvement in hijacking, sabotage or having personal or psychological problems that could have been connected to the disappearance.

Investigators say what little evidence they have to work with suggests the plane was deliberately diverted thousands of kilometres from its scheduled route before eventually plunging into the Indian Ocean.

The passengers and crew most likely died from suffocation and coasted lifelessly into the ocean on autopilot, an Australian report said in June.

Australian Deputy Prime Minister Warren Truss last week said that new information suggested that the airliner may have turned south earlier than previously believed and that as a result, the focus would be the southern area of the search zone.

That information was based in part on an attempt to map the position of the plane at the time of a failed satellite telephone call by Malaysia Airlines on the ground to the plane.

Malaysia Airlines was hit by a second tragedy in July when Flight MH17 from Amsterdam to Kuala Lumpur was shot down over a conflict zone in eastern Ukraine.

The MH17 disaster came just as some in Malaysia were beginning to get over what happened in March. "For something like this to happen, just four months after MH370, just when we were beginning to get on with life, it is just very difficult to take," one airline executive told Reuters at Kuala Lumpur airport at the time, sobbing as he spoke.

"You can't imagine how draining it is, how emotional it is. Everyone can't believe this is happening again, we are going through all of the emotions once again." 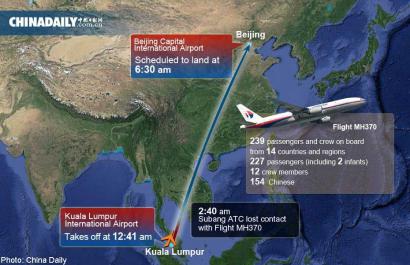