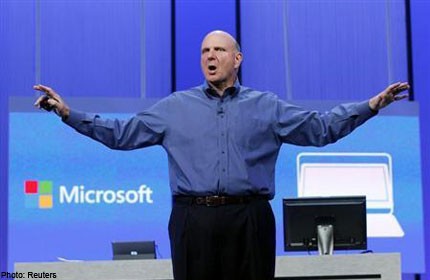 SAN FRANCISCO - Microsoft Corp launched its biggest internal overhaul in five years to streamline the development of products from Windows to tablets, hoping to catch nimbler rivals in mobile and cloud computing.

Lack of coordination and infighting have hurt innovation within the US$74 billion (S$93.23 billion) revenue, 98,000-employee organisation, which hopes to accelerate the design of products that appeal to a new generation of users more accustomed to smartphones and tablets than laptops or desktop PCs.

Some analysts see Thursday's moves, which include centralizing business-oriented functions such as marketing and research expenses under separate units, as helping shore up Ballmer's control over the sprawling corporation.

Removing major responsibilities for profit and revenue accounting allows the main divisions to focus on innovative products and eliminates the fiefdoms - Windows, Office for instance - that may have encouraged infighting in recent years, analysts said.

"You don't do a major reorganisation like this unless you have some serious problems," BGC analyst Colin Gillis said. "It consolidates power around the CEO."

Development of Windows will now be folded into one group headed by Terry Myerson. He had previously focused only on Windows Phone and now has responsibility for tailoring the flagship operating software for devices ranging from the traditional PC to tablets and gaming consoles.

Julie Larson-Green, previously co-chief of the main Windows division, will oversee a new division charged with all hardware devices, from the Surface tablet to the Xbox.

Nearly all of the most senior managers have a new role after the reorganisation, which did not include any major new hires.

The moves realign the company that helped revolutionise the personal computing industry in the 1980s into what Chief Executive Steve Ballmer calls a "devices and services"corporation - a nod to Apple Inc, which has surpassed it in profit and market value in recent years.

It is also an implicit rejection of "software", the business which Microsoft helped pioneer and drove the worldwide adoption of personal computing, but in which it faces stiff competition from new rivals that have popularised Internet-based services.

Executives told reporters and analysts on a conference call they did not plan layoffs for now. But a certain amount of employee disruption is to be expected as the company modifies its device marketing and development strategies.

"It can be a major distraction. The details have to be ironed out, there will be a lot of water-cooler talk and that's happening as the company has some critical products coming out, like a unified phone, Xbox," Gillis said.

Microsoft's shares have gained almost 30 per cent this year, helped by a rally that began in late April when the company released strong revenue and earnings during what was one of the worst quarters for PC sales on record.

Microsoft's stock hit a high of more than US$59 at the height of the first dotcom boom, but have mostly been in a range of US$23-$32 for the last decade. While rivals Apple and Google Inc have shot ahead of it in market value, Microsoft is nearly unique in its staying power near the top of the tech pyramid, and its Windows and Office businesses keep it a profitable giant.

Ballmer, who took over as CEO from co-founder Bill Gates in 2000, said he wants the company to be more like Apple, which has roared past Microsoft in sales and stock market value in the past few years by smoothly melding its devices with online services such as iTunes.

He is trying to bring products to the market faster and make the company more efficient, and wants to entice people to use Microsoft products on a variety of devices besides personal computers.

Microsoft, which has been struggling to compete in a world of mobile devices and Web-based services dominated by Apple and Google, launched the Surface tablet in 2012. But the device has failed to make meaningful headway against the iPad or Android devices made by Samsung Electronics and others.

Its Windows 8 release last year also alienated PC users accustomed to a long-established interface, prompting Microsoft to bring back, among other things, the familiar "Start" button in a hasty update. All operating systems now come under Terry Myerson, who had previously headed up Windows Phone and the software giant's efforts to crack the mobile market.

"We are rallying behind a single strategy as one company - not a collection of divisional strategies," Ballmer said in a memo to employees published on Microsoft's website on Thursday.

Microsoft has been struggling with sharply declining personal computer sales that cut into its software revenue as consumers and some businesses increasingly favour smartphones and tablets. Worldwide PC shipments declined 11.4 per cent in the second quarter, the fifth consecutive quarter of year-on-year decline, according to industry research firm IDC.

Now, the four new engineering groups include Myerson's operating systems unit, and applications and services engineering to be led by Qi Lu, who had previously overseen the perennially money-losing online services arm. He also will be responsible for Office software, one of Microsoft's biggest cash cows.

Kurt DelBene, the former president of Microsoft Office, will retire. His departure follows that of gaming chief Don Mattrick, now CEO of Zynga, and Steven Sinofsky, formerly head of the Windows unit.

Satya Nadella, the company's leading authority on Internet infrastructure, takes over all Web-based cloud services such as Azure, which competes with Amazon.com Inc's AWS.

It was unclear whether the changes will mean that Microsoft will offer less financial data about certain products.

"It's a major concern if they use this opportunity to reduce the transparency, so we're hoping that's not the case," Cross Research analyst Richard Williams said.

"From a strategic perspective, it seems that they're just streamlining the operating groups to bring all ... into one group, all the applications all the cloud focus, all the devices," he added. "There's a certain logic to that that makes sense to us."