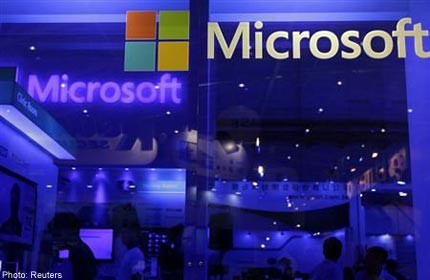 SAN FRANCISCO - Microsoft Corp will unveil on Thursday its biggest management reorganisation in at least five years, to better compete in a world of mobile devices and Web-based services, according to the technology blog AllThingsD.

The changes will shift the duties and responsibilities of many top Microsoft executives and are intended to eliminate overlap within the 98,000-employee company, AllThingsD reported on Monday, citing anonymous sources.

A new cloud computing and business-focused products unit would be headed by Satya Nadella, who currently oversees Microsoft's server business, according to a Bloomberg report last week. Julie Larson-Green, the current co-head of Microsoft's Windows operating system business, will lead the company's hardware efforts, including the Xbox video game console and the Surface tablets, Bloomberg said.

Ballmer announced in his annual letter to shareholders last October that Microsoft now sees itself as a "devices and services" company, rather than a software maker.

Microsoft's shares have gained almost 30 per cent this year, helped by a rally that began in late April when the company released strong revenue and earnings in what was one of the worst quarters for PC sales on record.

But consumers are increasingly turning to mobile devices such as smartphones and tablets instead of traditional PCs and the shrink-wrapped software products that are the foundation of Microsoft's $74 billion annual revenue business.

Under the new structure, Qi Lu, the head of Microsoft's money-losing online group, would also oversee Microsoft Office as well as other apps, Bloomberg said. Tony Bates would oversee Microsoft's business development efforts, including mergers and acquisitions and corporate strategy.

"What they have has worked for the past and led to some pretty profitable businesses, but when people are aligned with certain goals they may not be thinking the right way for the future," David Smith, an analyst with industry research firm Gartner said on Monday about the widely expected reorganisation.