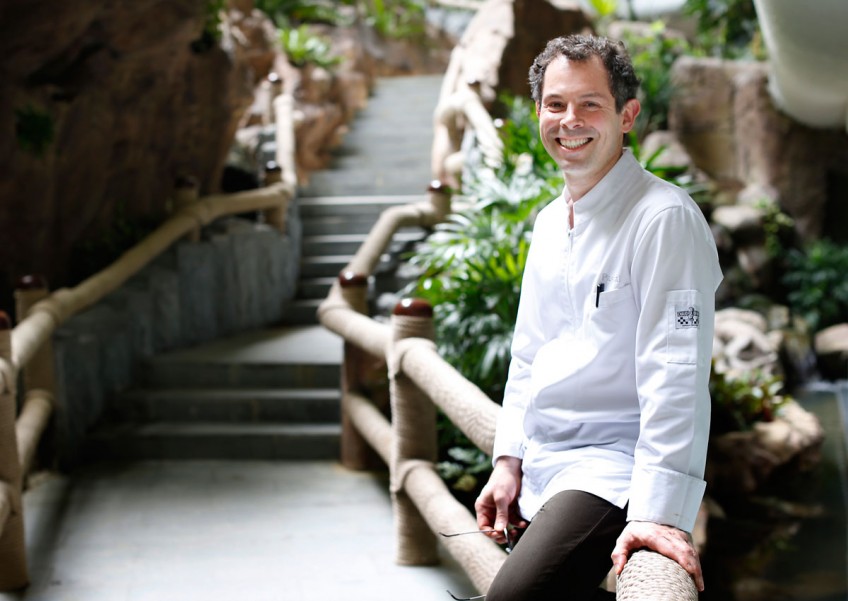 ASK Pascal Barbot how he stays at the top of his game in the competitive fine dining scene and the Michelin-starred chef shrugs his shoulders nonchalantly. "I just cook. There is no pressure and I am always relaxed."

Chef Barbot runs the three-star restaurant L'Astrance in Paris, which received its first star in 2001, a year after its opening, and its second star in 2005. At that time, the chef's minimalist cooking style was a minor revolution - his dishes contain no hint of the heavy, complex and opulent character usually associated with French cuisine.

That same year, he earned the prestigious Best Cook in France, and in 2007, L'Astrance earned its third Michelin star. L'Astrance is presently ranked 36th on The World's 50 Best Restaurants list.

It is an anomaly that the restaurant has retained its three stars despite a lack of pompous decor and menu. Each evening, guests are served a surprise menu which is determined by the availability of the freshest ingredients of the day.

"We just try our best," says the chef on how he retains his stars. "Getting Michelin stars was never my goal. What's most important is making the customer happy. Nothing pleases me more than customers making reservations for a return meal."

While he makes running L'Astrance sound like a breeze, there are factors that have led to its success.

Keeping it small is one. The restaurant only has seven tables that seats 25 diners. It has only 14 staff, including the stagiers and dishwashers. And oh, it is open only four days a week. It has been like this since it opened in 2000.

"Why would I want to open more days a week? No, I don't want to do that," says chef Barbot. "The lesser risk I take, the less stress and trouble I have."

He doesn't hog the limelight when it comes to explaining the restaurant's success. Instead, he gives credit to his partner, Christophe Rohat, a former maitre d'hotel from L'Arpege, where the two worked previously.

"It is not only the food that matters in a restaurant. The service is very important too; so is the wine pairing," he says.

And he also gives plenty of acknowledgement to his food suppliers, of which there are over 140 that deliver items to the restaurant daily."

Building a relationship with his suppliers is of importance to him. "I'm guaranteed the best quality and the freshest ingredients," he says. He visits the suppliers and farmers on the days when the restaurant is closed.

He was in Singapore recently for a four-night, pop-up dinner at Shangri-La Hotel. The menu included steamed toothfish with leeks, brown butter and white miso paste and roasted duck with morello cherries, spring cabbage and juniper berries.

For him it is not only important that the ingredients are at their best quality.

"I respect the produce greatly," he says. By that he means that the dishes are kept simple, and the focus is on the main ingredient. For example, the toothfish is simply steamed, so that its natural flavour comes through.

"I don't like to mess with the taste of the ingredient, but I like playing with condiments on the side," he says. For the toothfish dish, he placed some white miso and black sesame on the side, and it is up to the diner which condiment and how much he wants to add to his fish.

Chef Barbot's cooking methods and ideas are all inspired by his travels.

While serving his national service with the French Navy, he spent a year in New Caledonia and visited Indonesia, Fiji and Tonga.

It was in Indonesia that he first came across chilli and was amazed by its flavour. Coming from Vichy, in the middle of France, he had never seen anything like it. He now uses it to create a chilli sorbet as a palate cleanser at L'Astrance.

In New Caledonia, he recalls going fishing and cooking the fish with coconut flesh and lime juice. Even now, he often travels and takes his team with him. For chefs, he says, it is good to have an open mind and be curious and to want to see what's abroad.

"Now when the team sees an exotic fruit, they know what it is and how to use it," he says. "When I have unusual combinations on the menu, people say I am so original, I am such a genius."

But he dismisses all that. "I'm not a genius, I didn't save the world, I'm just a chef," he says. "For European diners, some of my combinations are exotic, but it is the norm in other parts of the world."

He says that since young, he always knew he wanted to be a chef. At 14, he went to a cooking school, and later trained at Maxim's in Paris, Clave in Claremont-Ferrand, Les Saveurs in London, and Troisgros in Roanne. He then worked with Alain Passard at L'Arpège, followed by two years at the now defunct Ampersand in Sydney, before opening L'Astrance.

He hopes to move L'Astrance to a bigger place, but has had difficulty finding the right location for the last two years. "There are just too many restrictions, and the French government doesn't care," he says.

For now, the status quo will have to prevail.

"Knowing that I can make customers happy, and knowing there is a two-month wait to dine at L'Astrance is a real highlight for me," he says.

This article was first published on April 23, 2016.
Get The Business Times for more stories.