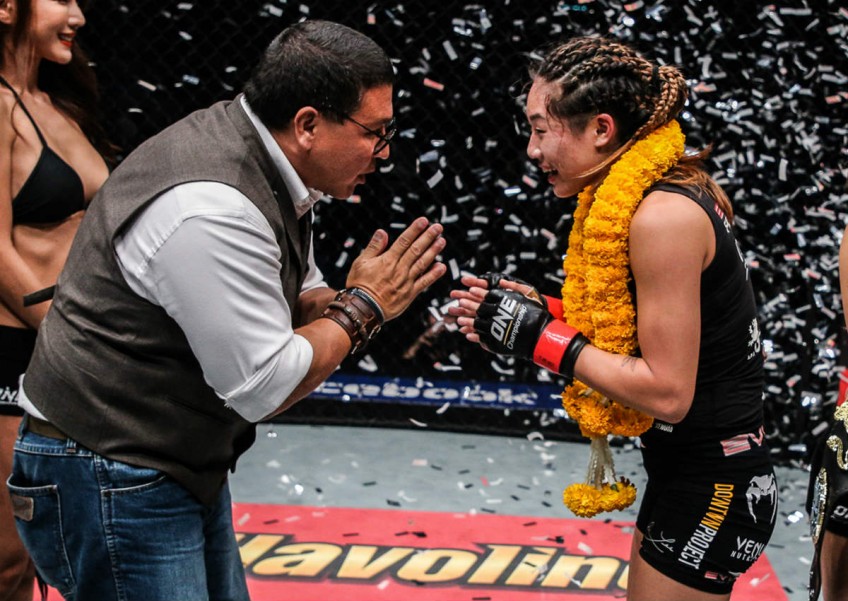 Barely 24 hours after retaining her world title, One Championship atomweight champion Angela Lee is already itching to get back into the ring.

Her 10-month absence from the arena hardly mattered, as she pummelled challenger Jenny Huang to emerge victorious via a technical knockout at the Impact Arena in Bangkok on Saturday night.

The imposing victory also preserved her unbeaten record, which stands at seven wins from as many fights.

The 20-year-old told The Straits Times in a phone interview yesterday: "I'm not the one calling the shots but I have been pretty vocal (to promoter One Championship) that I'd like to defend my title multiple times this year.

"I haven't taken any damage in this fight and I'm looking to get back in the cage as soon as possible."

Having previously said she needed to defend her title to feel like a "legitimate champion", she noted: "(I hope) it's the beginning of my really long reign as champion. It's a huge honour for me and I don't plan on giving this up any time soon."

She became One Championship's inaugural women's champion when she beat Japanese Mei Yamaguchi at the Singapore Indoor Stadium last May.

Lee, who is of Singaporean and Korean descent, is the youngest person to capture a world title in mixed martial arts.

But injury and scheduling issues meant she had to wait until this year to return to competitive action.

On Saturday, any doubts over her ability to find form evaporated quickly as she dominated from the start, her noticeably improved striking leaving the 26-year-old Huang on the back foot.

The contender from Chinese Taipei, who entered the bout with a perfect 5-0 record, was left bloodied and bruised by the time the referee halted the fight at the 3min 37sec mark of the third round.

It was Lee's first TKO win. From her previous six victories, five were by way of submission and one by unanimous decision.

Reflecting on her latest bout, she said: "I had some time outside the ring to sharpen my skills and I worked on a lot of striking combinations. I always want to finish the fight and I'm happy I executed my game plan.

"I wasn't nervous at all. It was a different feeling from my title fight. I felt confident, very well-prepared... honestly the cage is my home and I was homesick.

"I mean, I enjoy attending events and doing the media tours but the best part of the job is still the fighting. You don't know how happy I was to be back and to have my hand raised again."

While she has decimated all but one of her opponents - only the Yamaguchi fight went the distance - she does not think she has outgrown her division (52.2kg).

"It's going to take time to build up the atomweight division but I don't think there's a shortage of talent."

For now though, rest and a bit of travelling is on the agenda. That, and of course, digging into her favourite food.

She said: "When we came back to the hotel after the fight I ordered three flavours of ice cream. That was my mandatory celebratory dessert. I'm definitely going to be enjoying Thai food over the next few days."

In more ways than one, the champion is always hungry for more.