MMA fighter Ben Askren: "I didn't really poke him in the eye" 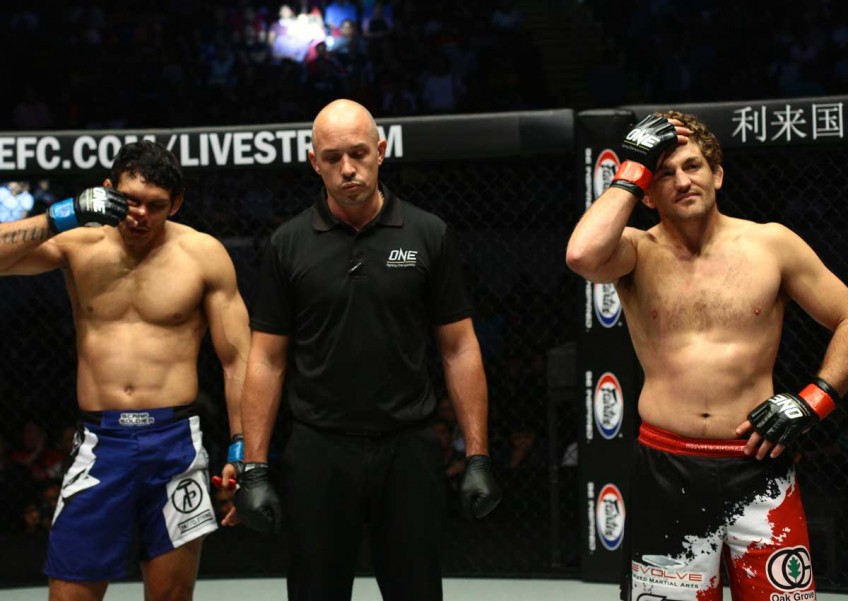 Mixed-martial arts (MMA) fighter Ben Askren meets Luis Santos in Singapore on Nov 13 for ONE: PRIDE OF LIONS in a rematch that will end the questions surrounding their first match, declared a no-contest after an Askren poked Santos in the eye.

The first fight is the only blemish on Askren's record (14-0-1) and one of the few fights in which he didn't score a quick takedown. Askren wasn't pleased with the first fight, claiming Santos exaggerated the injury to his eye and pretended not to understand English when the referee asked if he could go on.

The controversy of the eye poke finish is even more bizarre given Santos success both on the feet and on the ground during their first meeting last April. Santos was able to stuff Askren's relentless takedown attempts, switch at least two of them into top control, and landed several solid kicks, including a leg kick that took the welterweight champion off of his feet.

While fans speculate on the true cause of the eye-poke, Askren was quick to dismiss it in a recent interview with ESPN. "He's just ridiculous. I didn't really poke him in the eye. I barely caught him. He was acting like he couldn't speak English, which is a lie. It blew my mind," he said.

Askren has been a very vocal champion for ONE, commenting on events through his Twitter feed and responding to critics who say his one-dimensional style - takedowns to ground and pound to decisions - is boring and lackluster. He shut many critics up by pulling off four finishes in a row in his last five fights.

Askren has been dominant at 170lbs throughout his career, despite the criticism, and has consistently ranked in the Top 5 welterweights in MMA. The fight with Santos was one of the first times he was even slightly frustrated by an opponent, making the way it ended that much more disappointing. Santos is another fighter who has dominated on a global level. He's a dynamic striker with an excellent kicking game and incredible upper body strength, something he showed off in the few minutes he faced Askren for the belt. He's on a seven-fight win streak, including a decisive win over Bakhtiya Abbasasov via a tap-out after a vicious knee to the ribs. Santos has an incredible 61-9 MMA record and it's hard to imagine him playing up an eye poke in order to escape a fight he was controlling up until that point.

A more rational explanation is Santos concern about fighting the champion with one eye closed. Something simple like an eye poke or a groin strike can easily turn the tide in a match and although disappointing for all involved, Santos calling a halt to the championship bout in order to salvage his chances for the belt make sense. The fight in November will clear these questions up and add a lot of hype and expectation to the ONE Championship card. ONE is the dominant promotion in Asia right now and a grudge match between the striker Santos and the grappler Askren can ignite passions in Singapore, especially if Santos can maintain his control over the champion and expose a chink in his armour.

For Askren, the goal is to dominate as he always had before the no-contest in April and sweep away any notions of a new champion.

It promises to be an electric atmosphere in November when the two square off and determine what really happens when the Brazilian striker meets the Midwestern wrestler in a fight for welterweight belt.