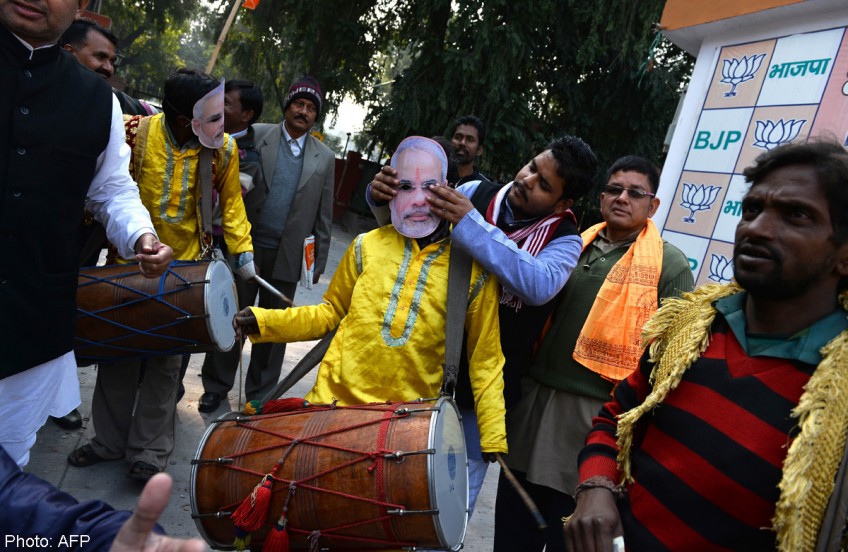 A drummer wearing a Modi mask as BJP supporters celebrated the party's victory in the Jharkhand state assembly polls last month. The BJP also broke a critical psychological and political barrier in Jammu and Kashmir, nearly doubling its vote share.

I have a confession to make. I cannot help but hopelessly admire what Indian Prime Minister Narendra Modi has just accomplished in the state of Jammu and Kashmir. Venturing into an almost virgin territory and capturing 25 seats in the 87-member state assembly to emerge as the second-largest party is nothing short of a coup for the Prime Minister's party.

The performance is even more remarkable, considering this is a Muslim-majority state and, as everyone knows, Mr Modi's Bharatiya Janata Party (BJP), a Hindu nationalist party, has a thing about all things Muslim. This is a state over which India and Pakistan have fought three bitter wars amid Kashmiri aspirations of going their own way.

This is Mr Modi's own "audacity of hope", if you will, rushing in where angels fear to tread. The BJP has breached the Kashmir fortress, breaking a critical psychological and political barrier. Its vote share has nearly doubled.

The long-term geopolitical implications of this development for the Himalayan state that joined India after being promised a "special status" under the Indian Constitution - something that the BJP has long opposed - can hardly be over-emphasised.

This election may well turn out to be the most defining one in Kashmir's history and for its future. Whoever forms the government in Srinagar, the BJP is set to play an influential, probably a kingmaker's, role in the state where it had not long ago been a political untouchable.

Both the People's Democratic Party of Mufti Mohammed Sayeed and the National Conference that repeatedly warned the voters against the saffron designs over Kashmir are falling over each other to court the BJP to form a coalition government. How did Mr Modi do it? Long-term planning and strategising, massive propaganda onslaught and communal polarisation - all the gems of a typical Modi campaign - had been successfully employed in Kashmir.

But, above all, it was the magical, all-conquering mantra of "development" that was carpet- bombed as a message for months before the elections that apparently did the trick; just as it worked in the general election and successive state assembly polls last year. It seems even the famously cynical Kashmiris, weary of their self-serving politicians and their endless hypocrisy, incompetence and corruption, could not remain impervious to Mr Modi's message of "change".

For the predominantly young Kashmiri population, the talk of jobs, good governance and development had been as irresistible as it had been for voters elsewhere in India during the recent elections. Mr Modi and his senior ministers never tire of singing endless hymns to the deity of development and good governance.

Who would have any issues with development? Everyone wants development and good governance. Everybody wants jobs, good roads, infrastructure and a good life.

Since Mr Modi moved to Delhi, the Bombay Sensex and Delhi's Nifty have claimed ever new heights. Inflation has bottomed out, aided by crashing global oil prices. Life is beautiful.

This is all very nice and awfully heartwarming. Except it isn't.

Even as "Development Man" Modi has been marketing and hard-selling exotic economic dreams to the breathless middle classes and impoverished masses with the finesse of a slick snake charmer, the Rashtriya Swayamsevak Sangh (RSS) and its numerous avatars have been playing out their own parallel orchestra.

The RSS is a right-wing Hindu volunteer organisation deemed the ideological parent of the BJP. It spawned a host of organisations such as the Vishva Hindu Parishad (VHP), youth organisation Bajrang Dal and other brothers in faith.

These members of the Sangh Parivar (or Sangh family) have been bursting with missionary zeal as they go about bringing Muslims, Christians and all those who "strayed" centuries ago "back home" to Hindutva, which serves to define Indian culture in terms of Hindu values.

In the past few weeks, several such "reconversions" have taken place across the country, including in Gujarat, the vibrant home state of the Prime Minister. Indeed, over the past few years, the VHP claims to have brought thousands into the Hindutva fold.

Mr Mohan Bhagwat, the RSS chief, did not mince his words as he dismissed opposition protests over conversions: "We are trying to create a strong Hindu society. Those who have strayed, they have not gone on their own. They have been allured and have been forcibly taken away. When the thief is being caught and my property has been recovered, when I am taking back my own property, what is new in it?"

So as far as the Sangh is concerned, this is essentially a "property" dispute over "strays".

And lest anyone still nurtured any misguided notions about India, Mr Bhagwat proclaimed: "This is our own country, our Hindu 'rashtra' (nation). What we have lost in the past, we will try to bring it back. Our God says that after 100 crimes, don't tolerate crimes against Hindus."

And we thought this was a "sovereign, socialist, secular, democratic republic"!

One would dismiss these pearls of wisdom as the rants of the fringe if it wasn't for the fact that the RSS happens to be the ideological mother of the governing BJP, VHP, Bajrang Dal and numerous other groups.

The Prime Minister himself is a life member and has included at least 19 senior RSS members as ministers in his Cabinet.

Home Minister Rajnath Singh cleared the air when he said on Nov 22: "The RSS is not an external force. The PM and I have been RSS volunteers from childhood and will remain so until our death. When we ourselves are members, how will the RSS influence us? One could have understood the argument of any organisation influencing the government if it had a different identity, a different ideology."

Yet all those who cheered and voted for Mr Modi the messiah, including those in the media and big business, cannot bring themselves to believe that the "Parivar" or family fun and games may be happening with the tacit understanding of the Prime Minister. In the face of strident opposition protests in Parliament and growing alarm and uneasiness in the country, Mr Modi has not uttered a word to condemn the saffron shenanigans. His silence is deafening.

And more dangerous than the "reconversions" and communal tensions being orchestrated across the country is the silent and insidious war on India's very identity and character as a secular, multicultural and democratic nation.

From rewriting of history to saffronising textbooks and from lionising Mahatma Gandhi's killer to demanding that minorities fall in line or leave, the Hindutva project reveals itself in so many fascinating ways. As Indian journalist and activist Praful Bidwai notes, what is scary is not that all this distracts attention from the BJP's "development" agenda but that shifting political goalposts through violent communalism has become its main agenda.

Whether or not all this is happening with Mr Modi's assent, one thing is for sure: Progress and the Sangh Parivar's regressive ways cannot go together. Investments are notoriously allergic to instability and uncertainty. Investors are the first to flee at the first sign of trouble.

The choice before Mr Modi and India is stark: Rein in the crazies now or say goodbye to the future - and all the progress and development that it promises. You cannot have your cake and eat it too.

"Don't ever take sides with anyone against the Family," advises Don Corleone in The Godfather, the Hollywood classic. In Mr Modi's case, though, he will have to confront his "Family" before it destroys everything in its path.

Aijaz Zaka Syed is a Dubai-based Indian journalist. He was opinion editor and associate editor of Khaleej Times, the Gulf's oldest English daily.