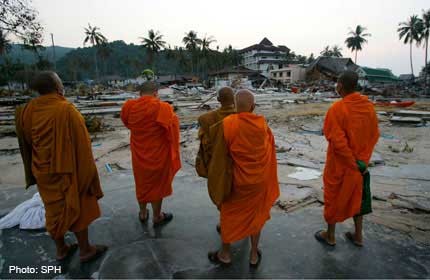 THIMPHU, Bhutan - Kencho Tshering, a red-robed Buddhist monk, takes a call from the King of Bhutan's office, then duly dashes off to start a ceremony praying for a break in the monsoon rains.

But while he may be on speed dial for royal requests, the clout of his fellow monks is on the wane in the remote kingdom as it absorbs the impact of technology and democracy as well as an abuse scandal.

"Bhutan is changing. The monastic body is going down and down," Tshering told AFP at Dechen Phodrang, the monks' school where he is principal, which is perched with majestic views over the capital Thimphu.

"Even for senior monks, there's no respect in the city," he sighed.

Bhutan - nestled in the Himalayas and flanked by both India and China - is renowned for its rich Buddhist culture, and villages are still steeped in its traditions.

Fluttering prayer flags are a common sight, as are giant flying phalluses painted on walls to ward off evil - a symbol of a national saint, the "Divine Madman", who is believed to have subjugated demonesses with his penis in the 15th and 16th centuries.

Yet Tshering, who spent three years, three months and three days in silent meditation, believes Buddhist devotion has waned since Bhutan allowed television in 1999 - the world's last country to do so.

"People are less god-fearing, less superstitious... The number of rituals they do has gone down," agreed Karma Phuntsho, author of "The History of Bhutan" and a former monk.

Phuntsho said the Bhutanese worldview has changed dramatically since secular education was widely introduced in the 1960s, weakening the dominance of monastic schools that for centuries were a powerful force.

Bhutan was unified in the 17th century by a Tibetan Buddhist teacher, and the old 'dzong' fortresses, part-monastery and part-government offices, are a reminder of the previous intertwining of religion and politics.

The decline in monastics' clout was clear with the onset of democracy five years ago. Bhutan's monks, nuns and a large community of lay priests are now barred from the process to ensure religion and politics are kept apart.

In terms of spiritual influence, some say monastic materialism is partly to blame for a decline.

Although usually associated with a spartan existence, Bhutan's strand of Buddhism allows monks to own a range of possessions - "there are even monks with big cars," said Damber K. Nirola, a psychiatrist in Thimphu.

But the monasteries still play a vital social role, providing homes to thousands of children whose parents may have died or feel unable to support them.

At Dechen Phodrang, young monks can be found busy learning the national 'dzongkha' script, making colourful cakes to offer the deities, or blowing the sound of the long 'dungchen' Buddhist trumpet over the valley.

With a government allowance per boy of less than a dollar a day, Tshering says it is a struggle to look after their 260 students, aged as young as six, who sleep in rows on classroom floors.

While just over 7,000 monks are registered with the central monastic body, on the ground about 9,000 to 11,000 exist at any one time, according to Karma Penjor, secretary at the Commission for the Monastic Affairs of Bhutan.

"They can't say no when people come with their children," he told AFP, saying the monasteries look after and educate "Bhutan's poorest of the poor".

They are also not without controversy.

A recent report by The Raven, a Bhutanese magazine, told the story of two young boys who said they escaped their monastery after being sexually abused by two of the older monks, who are supposed to be celibate.

The National Commission for Women and Children confirmed to AFP that the case had been dealt with internally by the monastic body, and one of the accused had been disrobed.

Between young monks, non-penetrative "thigh sex" is also "common", according to a UNICEF-supported report in 2012 on vulnerable Bhutanese adolescents.

Psychiatrist Nirola, a former district medical officer, said he found sexually transmitted diseases were quite regular among monks and possibly from heterosexual liaisons outside the monasteries.

He also came across youngsters suffering stress from the highly disciplined lifestyle, which was often not one of their own choice.

"They want to go to town, play on smartphones. That creates a lot of problems in their mind."

In May, the monastic commission opened a child protection office for the welfare of young monks and to raise awareness about their rights, but Penjor said better backing was crucial to its success.

"It's one thing to keep having awareness workshops, but if support for infrastructure is not there, after a while rights keep falling off, it's not very effective."

Some monks have embraced Bhutan's modernisation in a bid to get more support.

The Phajoding monastery, which is a three-hour uphill hike from the nearest road, is using social media to spread its news and raise funds, with regular updates on Twitter and Facebook.

Phuntsho thinks it will take more than PR to get Bhutan's monastic body on the rise again, and a key to that is modernising its education system.

"It's a big challenge for the monastics. I can see a very urgent need for them to reform and develop, but it's very unfair to expect that of them when they don't have the resources."