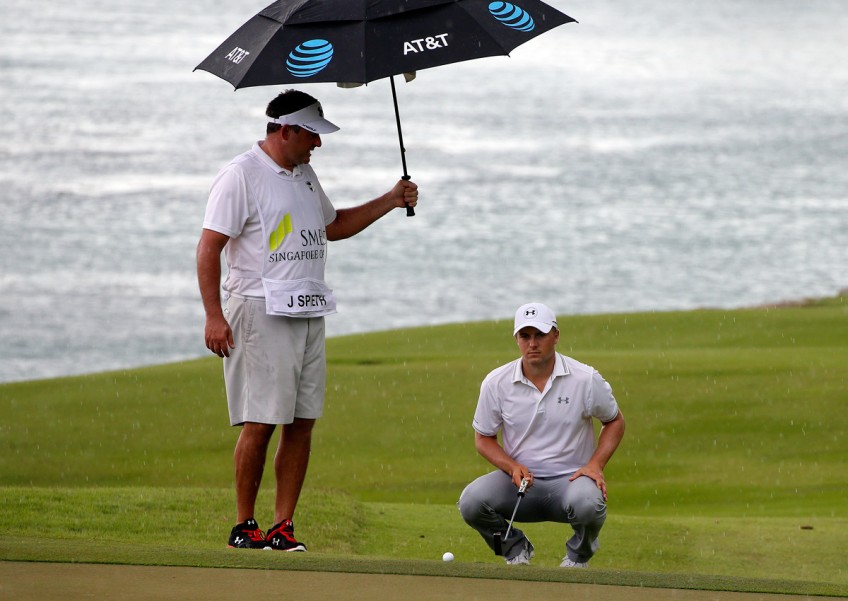 Jordan Spieth taking shelter from the rain under the umbrella of manager and stand-in caddie Jay Danzi at the SMBC Singapore Open yesterday. After a fine opening 67, he was even par after six holes when play was called off. He and 77 others will resume their second rounds this morning.
The Straits Times

The dreaded Monday finish looms at the SMBC Singapore Open, as Mother Nature once again proves too formidable a foe for players and officials at the Sentosa Golf Club.

With inclement weather halting play by about two hours for a second straight day, the weekend cut at the full-field tournament will be made only today as 78 players - including world No. 1 Jordan Spieth - have yet to complete their second rounds.

As more afternoon rain is expected over the next two days, organisers could be faced with the dilemma of slashing play from 72 to 54 holes, or completing the fourth round on Monday.

A spokesman for the Asian Tour, which is co-sanctioning the event with the Japan Golf Tour, said a decision will be made later today.

The rain has become part of the fabric of the Singapore Open, which is returning after a three-year hiatus.

The event was switched from a November to January date to avoid the peak monsoon season.

The 2006 and 2011 editions were also shortened to 54-hole outings - which players expect to happen this weekend.

"I really don't think we will get to 72 holes, not when the rain is this bad and this long," said Thailand's Thanyakon Khrongpha, who is tied-sixth (138 total) after a second straight two-under 69.

"It is so hot in the morning and then the rain comes."

Torrential showers hit the Serapong Course yesterday as players in the afternoon flights were midway through their second rounds.

Spieth, who was even par through six holes, broke out in a wry smile as he rushed to a buggy under the umbrella of manager and stand-in caddie Jay Danzi.

"That's golf, that's weather, you can't control that - I could tell it was bad on other parts of the course," the Texan said later.

Players took shelter in the clubhouse for more than two hours before an announcement was made at 5.20pm that play had been cancelled for the day.

It sparked some confusion and disappointment as just minutes earlier, they had been told by officials that action would resume at 5.40pm. Thai Natipong Srithong, who sits joint-38th after a 73 (142 total), said: "With the wind, the rain and the already-difficult course, this is becoming a nightmare."

Some players, however, had shone earlier on the slower, wet greens.

It would have tied the course record had preferred lies not been in play following overnight rain.

Under this ruling, golfers are allowed to improve their lies without penalty on certain parts of the course.

Song, a three-year professional looking for his first tour title, said: "I tried to make the best of the conditions and thankfully, my clubs worked well for me.

"The only thing we can do as players is to play our best if we are given a chance by the weather to be out on the course."