Local newspaper L’unione Sarda describes the property as ‘a heavenly and exclusive residence in the heart of the Costa Smeralda’.

A 33-year-old Chinese woman has paid €80 million (S$117m) in cash for a 49-room property with three private beaches on the exclusive Italian island of Sardinia, according to the island’s oldest newspaper, L’unione Sarda .

The buyer was identified as Nani Wang, and her name is the same as that of a former board director of JD Health International, the healthcare arm of Chinese e-commerce giant JD.com.

Her name was revealed when a cashier certified Wang’s signature on an urgent transfer note for the money to a Swiss bank account that is believed to belong to the seller, on April 18, the Sardinian newspaper reported.

Joseph Jack Setton, an American, was named as the seller of the property.

JD Health did not respond to an emailed query by SCMP.

It is one of the biggest property transactions by Chinese buyers since China was hit by the pandemic in 2020.

Last year, Chinese buyers bought US$2.3 billion (S$3.2b) worth of property in Europe, down 18 per cent from US$2.7 billion in 2020, according to Real Capital Analytics, which tracks deals worth at least US$10 million.

From January to May this year, this investment has already reached US$1.4 billion, it added. 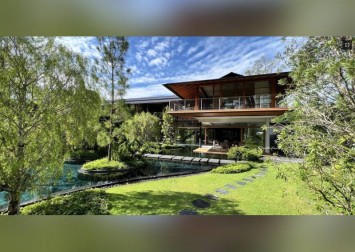 “Luxury properties that come with private beaches [in famous tourist spots] are sought after, as these are rare products in the market,” said Vincent Cheung, managing director of Vincorn Consulting and Appraisal in Hong Kong. The property could have been acquired for self-use or for turning into a prestigious resort for the rich and famous, he added.

“Billionaires can use it to entertain their guests, as it serves as a status symbol of wealth. They also like owning vineyards and waterfront villas,” Cheung said.

L’unione Sarda describes the property as a “revolutionary house” conceived in the seventies by English tycoon Lord Charles Clore, which has become “a heavenly and exclusive residence in the heart of the Costa Smeralda”.

The property is very private and inaccessible by public transport. With 1,300 square metres of interiors, it is dotted with the “rarest and most exclusive” works of art, the report says. It also features a heliport and swimming pools, as well as a cinema room, four large VIP suites and eight guest bedrooms, three of which are in a separate private pavilion with a living room and kitchen.

From a business point of view, the property could be transformed into a super deluxe resort offering top-class accommodation and medical and wellness services, he added. But businesspeople usually buy assets through bank loans instead of paying in cash, said Vincorn’s Cheung.

European estates, particularly castles, have proved to be popular trophy assets among wealthy investors, including those from mainland China, according to agents.

And demand seems to have gone up because of the coronavirus pandemic.

“Buyers are looking for privacy and space, and what better place to be isolated in than your very own castle,” Lodovico Pignatti Morano, managing partner at Italy Sotheby’s International Realty, told SCMP earlier. “Given the circumstances of Covid-19, demand has definitely increased,” he said.

Prices of trophy assets vary depending on location, size and condition of the structure, according to property agents. For instance, prices in Italy range between €7 million and more than €20 million.

But a buying spree by Chinese investors is unlikely. “Chinese buyers are still restricted by capital outflow limits,” said Martin Wong, director of research and consultancy for Greater China at Knight Frank.