Whether Hong Kong can hold on to the spot as the world’s most expensive place to buy a house is uncertain.

Four of the world’s five most expensive housing markets were in Asia last year, with Hong Kong maintaining its crown as the priciest with an average price of US$1.25 million (S$1.7 million), according to a report by property consultancy CBRE.

Whether Hong Kong can hold on to the spot is uncertain, with analysts expressing mixed views about the city’s prospects given the global downturn and the resurgence of political tensions over a security law that China plans to impose, a measure widely perceived as eroding the city’s semi-autonomy and threatening its status as a top business hub.

In the sixth edition of the Global Living 2020 report, Hong Kong topped 38 other cities, with average prices of homes rising by 4.7 per cent during 2019.

The German city of Munich, a new entrant to the survey, came in second with average home prices rising 11 per cent to US$1 million.

Hong Kong was also the third most expensive place to rent a home, with New York and Abu Dhabi, respectively, taking the top two spots.

Singapore, Hong Kong’s main rival as Asia’s financial hub, came in third in the CBRE survey, falling a notch from the previous year, with home prices increasing 2.7 per cent last year to an average of US$915,601.

Like Singapore, Shanghai and Shenzhen both fell one spot from the previous survey, following the inclusion of Munich.

The price increases last year in Hong Kong and the three mainland cities were significantly slower than their 10-year average increase of between 9.6 per cent and 12 per cent. 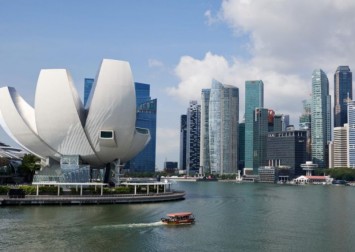 “Once again, the Asian powerhouse of Hong Kong was the most expensive property market in 2020,” said Jennet Siebrits, head of residential research at CBRE-UK and one of the report’s authors.

Average prices of homes in the city were hardly dented by the economic downturn triggered by civil unrest that regularly disrupted businesses and descended into violent clashes between police and protesters.

CBRE reckons that Hong Kong will remain the world’s priciest market to buy a house although “potential civil unrest and the coronavirus may undermine [its] residential property market.”

Low interest rates in the city, and the huge gap between supply and demand are likely to keep home prices from seeing a huge decline, according to Simon Smith, senior director and head of research and consultancy at Savills.

“We are still forecasting only modest falls this year of around 5 per cent,” he said.

“Partly because of persistently low real interest rates but also because of limited supply levels and plenty of pent up demand.”

There is estimated demand for 430,000 public and private housing units in Hong Kong in the next 10 years.

The city’s relatively successful response to the coronavirus outbreak should also keep its home prices from sliding too far.

“The market has now stabilised and we do not think it will fall further for the rest of the year, then we expect it to start to increase within 12 to 18 months,” said Victoria Allan, founder and managing director of local boutique agency Habitat Property, which focuses on upscale properties.

If political tensions remain muted, Allan said the recovery “might be drawn out further.”