Ravi Menon, the managing director of the Monetary Authority of Singapore.

Singapore has sought to distance itself from key cryptocurrency players based in the country currently mired in trouble, with the central bank chief saying these “so-called Singapore-based” firms had “little to do” with the city state’s crypto regulations.

Speaking during the release of the MAS’ annual review report, Menon said the key lesson from recent events was that “investing in cryptocurrencies is highly risky”. This had been the central bank’s warning to the public over the past five years, he added.

“It is not a good investment vehicle for retail investors because the price volatility is huge, and you can lose large amounts of money,” he said.

Menon pointed to Three Arrows Capital – one of the world’s largest crypto hedge funds which recently went bankrupt as bitcoin prices tanked – and said the company was not regulated under the Payment Services Act, which governs providers of digital payment token dealing or exchange services. The hedge fund, while registered as a fund management business, “had ceased to manage funds in Singapore prior to the problems leading to its insolvency”, he said.

TerraForm Labs and Luna Foundation Guard – the firms behind stablecoin terraUSD and companion token Luna, which had a spectacular 99 per cent collapse in May – “are not licensed or regulated by the MAS”, Menon added, and neither was Vauld, which is now in discussions to be bought over to stave off collapse after freezing client withdrawals.

The annual review released on Tuesday showed MAS clocked a net loss of S$7.4 billion for the financial year ended March 31 because of the strengthened Singapore dollar, which grew by 4 to 5 per cent against key global currencies like the Sterling and Euro.

Menon said while Singapore was seen as being ahead in terms of crypto licensing and regulatory frameworks, the focus had been on money laundering and terrorist-financing risks, not consumer protection, market conduct, and reserve backing for stablecoins.

The central bank chief promised this would change. The MAS would consult experts on proposed measures in September or October, and eventually introduce tighter regulations including on retail investors’ access to cryptocurrencies and business conduct rules for the exchanges listed in Singapore.

Menon said this “broadening” of regulations would mean “players who are doing some of these activities but are currently not caught may well be caught”, but Singapore also wants “good, strong crypto players to be based here”.

Noting that the central bank’s warnings against retail investments in cryptocurrencies had raised questions as to where it stands with respect to the digital asset ecosystem, Menon said the MAS would next month explain its position on cryptocurrencies, stablecoins, blockchains, tokenisation, smart contracts and digital assets. “People want to know what is the lay of the land and where we stand,” he said.

“We are actively promoting the digital asset economy where we can use these technologies to solve real problems like cross border settlement, cross border trade finance, more efficient capital, market activities and trading and so on,” Menon said.

Zennon Kapron, director of fintech research and consulting firm Kapronasia, said the difficulty in protecting consumers was in striking a balance between giving them access to cryptocurrencies “but keeping them from losing their shirts”. He suggested the central bank consider having investors take a “licence”, and demonstrate that they have “a certain level of knowledge or understanding before they can trade”.

A large part of Menon’s address this year was focused on inflation, which he said was the key macroeconomic challenge facing countries from the United States to Sri Lanka and Singapore. Menon said central banks were likely to further tighten monetary policy “substantially” over the next six months.

Singapore had just executed a second off-cycle tightening on July 14. The city state usually reviews its monetary policy every six months in April and October, but this year had already performed two off-cycle tightenings – making it four tightenings in the nine months since last October – to strengthen the Singapore dollar in a bid to dampen inflation. 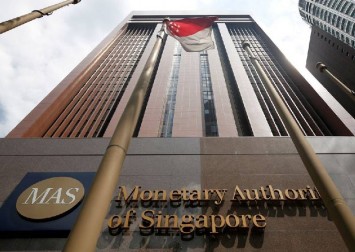 The central bank chief said the four tightening moves would continue to dampen inflation over the next 12 months, restraining core inflation by an average of 1.2 per cent each year.

Monetary policy, however, cannot completely offset inflation because of the “global nature of the price pressures we are facing”.

“When there is a pick-up in global food and energy prices of the magnitude we are seeing today, it is not possible to completely insulate the domestic economy from these increases,” he said.

Menon said the global economic growth next year was likely to be slower, and a good scenario would be if growth slows down sufficiently to reduce inflation but the economy avoids a recession. However, what was more likely would be a short-lived technical recession that tames inflation and sets the stage for sustained recovery, he said.

The worst scenario would be if growth stagnates while inflation remains high. Menon said Singapore was not expecting a recession nor stagflation, “but there are considerable downside risks in the global economy which bear close watching”.