Public housings built by Singapore’s Housing and Development Board.

In 2017, Brandan Chan and his girlfriend thought they had the perfect plan: buy a Built-To-Order (BTO) flat constructed by Singapore's Housing and Development Board (HDB) and get the keys to their new home within three to four years. Marriage and a family would follow soon after.

Applying for a new government flat was the typical route taken by most young Singaporeans looking to land their first homes. But fast forward four years and the couple's housing dream has been shattered.

While it typically takes three or four attempts to secure a BTO flat, which requires a balloting process that is akin to a property lottery, Chan and his girlfriend have failed seven times.

Time is also no longer on their side - the Covid-19 pandemic has delayed the completion of ongoing BTO projects and extended the waiting time for future builds. Some buyers are now facing a wait of almost six years for their homes to be ready, instead of the usual three to four years.

"Even if we were to get a successful ballot now, it'll be already way too late," said Chan, a senior consultant at a recruitment company. Facing the prospect of only moving into their first home in their mid-thirties, the couple, now both 29, turned to a backup plan: the HDB resale market. But even this approach is now posing a major financial headache.

The couple's difficulties come at a time when the pandemic and a demographic bulge of people looking for new homes have fuelled a huge demand for public housing in the city state. The price tag of resale flats is now skyrocketing in a country that has prided itself on providing affordable and accessible public housing, with almost 80 per cent of Singaporeans living in HDB flats.

Prices have risen for 14 straight months, and the HDB resale price index is just 0.1 per cent off the record high of 149.4 points set in April 2013.

"The prices are crazy now," Chan said. "Because of Covid-19, overall prices of resale flats have risen dramatically. It's hard to spend that kind of money when prices are at such a peak."

A Covid-induced labour crunch in the construction sector has held up the completion of many ongoing BTO projects - some by up to a year. This delay, according to International Property Advisor chief executive Ku Swee Yong, is the main driving force behind the surging prices of resale flats.

The manpower shortage comes as many migrant workers - who constitute the majority of the construction industry's workforce - returned home last year due to the pandemic.

In April, Singapore also banned all long-term visit-pass holders and short-term visitors from India and Bangladesh - a move that exacerbated the labour shortage, as a significant share of workers come from these countries. In addition, new Covid-19 safety measures introduced at construction sites mean future projects will take a longer time to build.

"With supply chain disruption, some people might not be prepared to face the uncertainty of a longer waiting time, so they turn to resale flats, which pushes up their prices," said Nicholas Mak, head of research and consultancy at real estate firm ERA Realty.

According to Singapore real estate portal SRX, 19,141 resale units were sold between January and August, an increase of just under 40 per cent from the same period last year. A total of 24,478 resale flats changed hands last year, according to the HDB.

Prices have also soared. The median price of a 1,000 sq ft four-room resale flat in Sengkang was S$465,000 (US$344,000) in August, up more than 10 per cent from last year, going by HDB data. Some flats in the same area - a residential estate in Singapore's northeastern region, largely populated by young families - were even going for as high as $680,000.

A demographic trend is also contributing to the price hike. "Echo boomers", or the children of baby boomers, are boosting demand for public housing, as more settle down and look for their own homes.

More pertinently, the ultra-low interest rate environment, a mainstay economic factor over the past decade, has continued to fuel a property boom. This was a "very big phenomenon" that had a huge impact on public housing prices, said Desmond Sim, chief executive of real estate consulting firm Edmund Tie.

"This emboldens people to make more costly purchases as job security in Singapore has been quite stable, and they feel that they won't be affected as much by monthly repayments," he said.

With resale flats expected to hit record highs this month, real-estate analysts say the elevated prices are unlikely to abate in the near future.

"The situation is likely to continue until the supply chain disruption is resolved," said Mak from ERA Realty. "The government is trying its best to increase supply but the supply chain is facing headwinds. And as public housing is the most basic type of housing, to reduce demand is impractical because everyone needs a place to live."

Buyers hoping for an eventual drop in prices will have to be patient as the government tries to clear the backlog of delayed BTO projects, according to Sim from Edmund Tie.

"It's just something we have to wait out," he said. "The key thing is to get to the light at the end of the tunnel quickly, and the government needs to get the timeline [of BTO projects] back in order."

Read Also
BTO-to-resale price gap: Are they always the same? A look at 19 years of data 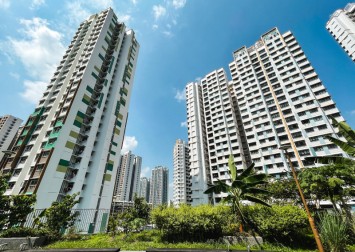 To this end, he suggested the government could offer incentives for more contractors to come in and increase the pipeline of flats.

In comments sent to This Week in Asia, the National Development Ministry clarified that first-time buyers in non-mature estates who had not secured a flat after at least two ballot applications would be offered additional ballot chances.

While the HDB has launched more new flats in mature estates in recent years, the ministry added that virtually all first-time buyers seeking BTO flats in non-mature estates had succeeded in getting one within their first three tries.

Sim also said there were two things prospective buyers could do. "You either enter the rental market for the time being, or bite the bullet and look for something [such as] a private home or resale flat."

Tan Ern Ser, a sociologist at the National University of Singapore, said if the public-housing issue persisted, there might also be demographic implications for Singapore in the long run. "Housing issues could also affect fertility rates, increase the rate of population ageing, and lead to a shrinking population," he said.

The government could also have a group of disgruntled voters on their hands by the time the next election rolls around.

"If a significant number of people feel left out, excluded, unfairly treated, or lose hope in the future, it would erode the social compact and trust between the government and an important segment of society," Tan said.

There are already signs of this. Having failed to get a BTO flat despite multiple attempts, and now finding his housing ambitions hampered by sky-high prices, Chan said his situation "made no sense".

"It's extremely frustrating," he said.