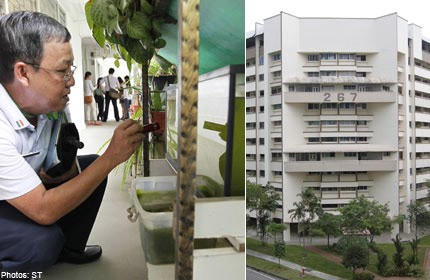 An NEA officer checking flower pots and containers for mosquito breeding spots at Block 249 Tampines Street 21, an area which was the biggest dengue cluster in March. The newspapers reported on June 11, 2013 that another person had died from dengue, the second victim to have succumbed to the disease this year.

SINGAPORE - I suggest that the National Environment Agency (NEA) implement other methods, such as biological control measures, to control the present dengue epidemic.

The current system of fogging and eradicating breeding grounds seems to be ineffective, if the 9,000 cases and two deaths are any indication ("60-year-old man 2nd person to die of dengue this year"; June 10).

Genetically altered sterile male mosquitoes were also set loose by scientists in a 40-acre region in the Cayman Islands between May and October 2010. By the end of the trial, mosquito numbers in that area dropped by 80 per cent compared with a neighbouring area where no sterile mosquitoes were released.

These fish have adapted to the sewage drain conditions and are involved in regulating the populations of different species of pest and vector mosquitoes.

The NEA has to be more aggressive in its fight against dengue fever. It should consider using biological agents to control Aedes mosquitoes as the present control measures appear to be ineffective and inadequate.