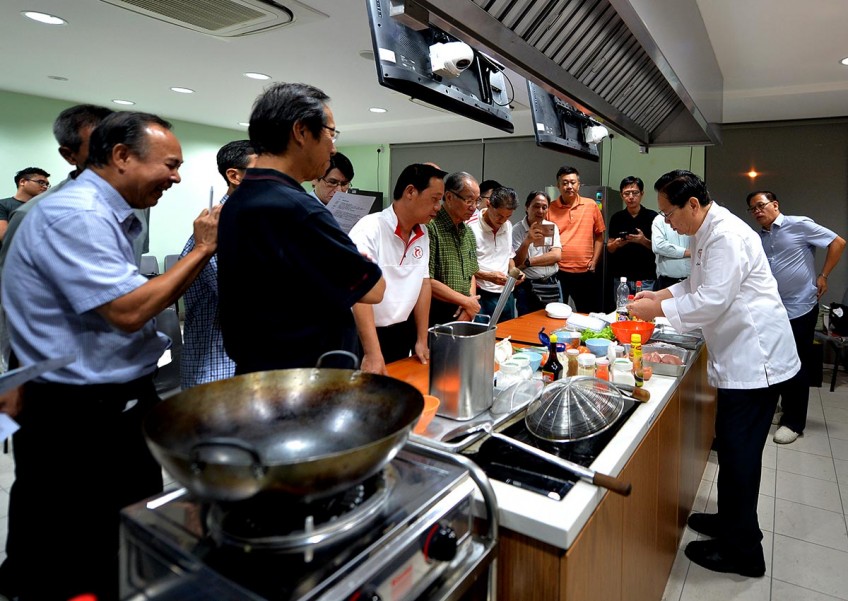 SINGAPORE - It is like Fifty Shades except instead of leather, the men don aprons. Yes, there is whipping and beating, but it involves cream and eggs.

Men are joining cooking classes in droves. Men who cook are just so sexy, say the instructors.

Jes, 31, who owns Buonissimo, a European cooking school here, says: "A man who knows his way around the kitchen can be attractive."

Jes, as she prefers to be known, says some of the men have found girlfriends thanks to the cooking classes.

She says: "They are in their early 30s, not married and looking to meet people. They want to meet women. It is quite obvious."

She reveals that there were two men who used to attend her cooking classes regularly three years ago.

She says: "They found girlfriends here, and they stopped coming."

Jes says there has been a 30 per cent increase in the number of men attending her classes compared with two years ago. Her class size is 15 students.

The owner of the Food Playground cooking school, Mr Daniel Tan, 39, says the gender ratio in his classes has shifted too.

It has been the same experience for Ms Lynette Foo, 44, chef and owner of the Palate Sensations cooking school.

She says: "Men like to be a master in something. In our art of butchery class, they learn how to butcher quail, chicken, turkey and pork, how to cut vegetables, fillet fish and de-bone chicken."

She adds: "They harbour secret aspirations to be a chef but they can't because they realise they earn more with their day jobs.

"So they come on weekends, put on their uniforms, play with knives and make beautiful food. Because they realise they will never earn enough as a chef."

The prevalence of cooking shows on television too has made cooking more trendy among men.

Says Mr Tan: "In the past, the man was known to be the breadwinner. The wife was the homemaker and took care of the family.

"These days, most families are double income and whoever has the time or interest in cooking, cooks.

"Men tend to want to cook for their kids. They don't want them to eat out all the time."

He sees more younger couples and men taking up cooking as a survival skill as well.

Cooking is increasingly seen as glamorous, unlike in the past.

Mr Tan says: "You put on an apron in a fancy kitchen. These days, when they do up their kitchens, they want to do them up nicely.

"It is definitely more sexy these days. Some like to entertain friends and impress their family members."

Men like making fresh pasta, says Jes. But baking is not so hot (pun intended), say the cooking instructors.

South Korea is experiencing a similar trend because more women are working in demanding professions.

The popularity of Korean drama serials such as Flower Boy Ramyun Shop and King Of Baking, Kim Tak Goo, has also contributed to the trend.

Bent on perfecting his medium-rare steak

One bite of a perfectly cooked medium-rare ribeye steak in his teens was all it took for Mr Khim Yap to go on an epic journey of discovery.

His mission: To cook the perfect steak.

Mr Yap, 44, was first inspired to cook when he was studying in a university overseas. That was when the experimentation started.

Mr Yap spent hours on research and cooked dozens of steaks over more than 10 years instead of attending cooking classes.

He discovered the sous vide method only after watching Iron Chef Masaharu Morimoto, on the show Iron Chef America, using the technique.

Sous vide originated in France and is used in fine-dining restaurants.

Food is vacuum-sealed in a plastic bag and cooked for hours in a water bath with regulated temperature to ensure it is cooked evenly while retaining moisture.

He spent 18 months researching and experimenting the technique with a sous vide immersion cooker before getting it right.

Now, Mr Yap is a self-taught sous vide enthusiast who prides himself on being able to cook the perfect medium-rare steak every time.

He blogs about his passion at sousvideguys.com.

The secret for the perfect medium-rare steak, says Mr Yap, is cooking the beef in a water bath regulated at 53 deg C for one hour.

"The timing is calibrated by experts and they have done mathematical calculations to ensure all pathogens are killed," he adds.

His sons, aged 10 and six, are interested in cooking too.

He says: "They help me in the kitchen and they fight for jobs."

By cooking his own meals, Mr Yap says he can now enjoy his favourite meals without spending too much.

He says: "Because I don't have to pay a chef to do it, I buy expensive cuts. Even if you buy Wagyu beef, you still save a lot."

He says a Wagyu ribeye steak would cost about $50 at a restaurant but only about $20, depending on the grade, if he buys it from a grocer.

Mr Yap, who finds cooking fun, says: "I do it because I want to introduce my family and friends to the food. It is about sharing that love of food with others."

In a craft room at MacPherson Community Club (CC) on a Wednesday evening, a group of 18 men crowded around a workbench in a kitchen set-up.

One participant was busy jotting down notes while the chef explained as oil bubbled around a piece of pork.

While there was banter, the participants were focused, not wanting to miss any tips. Welcome to a cooking class for men, a special interest group under People's Association (PA).

The group at MacPherson CC, which has about 30 members, was set up last year and they meet once a month for these lessons.

There are three such interests groups under PA, up from one 10 years ago, boasting almost 200 members in total.

The other two groups are at Braddell Heights CC and Geylang Serai CC.

Mr Loo Tiong Bin, 64, who set up the groups, conducts the classes. He is a PA trainer for culinary arts.

The New Paper on Sunday checked in with the group two weeks ago and watched as Mr Loo taught the men how to cook Hainanese pork chop and Yangzhou fried rice that day.

The semi-retired chef says in Mandarin: "I wanted to group men together to learn cooking, so they can go home and cook for their families.

"They can help their wives in the kitchen - this is a form of housework - and it helps with family bonding."

The first group at Geylang Serai CC started with 10 men and has grown to about 70.

The groups meet regularly once a month or once every two months to learn how to cook restaurant dishes like chilli crab and assam fish head.

Says Mr Loo: "If it is too simple, their wives know how to cook too."

He selects more flavourful dishes to cater to men's taste buds. "They prefer food with a stronger taste as they often eat out. If they eat something bland, they will frown," he says.

Regular participant Tan Beng Kwee, 47, a phone card agent, joined the group 18 months ago. He says: "I hope to learn more skills. If one day, I am out of a job, I can be a hawker."

Mr Rayner Lee, 37, an analyst, wants to pick up practical skills to use at home. The father of a 30-month-old girl says: "We usually cook by gut feel but the chef will teach us techniques, like the temperature of the oil, which we did not know."

When asked what his wife thinks of the classes, he says: "She is happy and hopes I will cook some dishes I have learnt here."

This article was first published on November 1, 2015.
Get The New Paper for more stories.