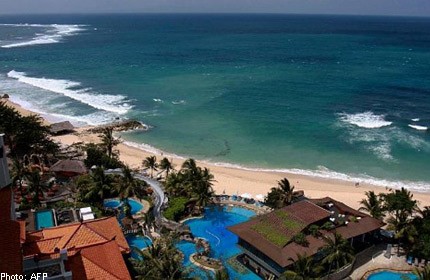 INDONESIA - The Tourism and Creative Economy Ministry has said that its Bali and Beyond tourism programme has started making promising progress.

I Gusti Ngurah Putra, secretary at the directorate general of tourism marketing in the Tourism and Creative Economy Ministry, told Bali Daily on Tuesday that there was around 6 per cent growth in foreign tourist visits as of June this year.

The programme aims to promote diverse tourist destinations around the archipelago, other than Bali, and significant growth of more than 100 per cent has occurred in places such as West Papua.

West Papua, which is benefiting from a recent direct promotional programme from the ministry, saw 900 visitors in 2005 but to 2012 has been enjoying an annual increase in tourist arrivals of almost 170 per cent.

Although tourist arrivals to Bali are slowing, the province still managed to show 5 per cent growth in 2012.

"This is a positive indication that the Bali and Beyond programme is working. It shows that we are beginning to distribute visitors to other destinations, not only Bali," Putra said.

Putra pointed out that the programme had begun to receive support from airlines opening new routes across the country, both domestic and international, that do not require a transit in Jakarta or Bali.

Putra declined the notion that Bali had started losing its appeal. "People still visit Bali. However, they probably do not enter Bali directly. They come to Bali after visiting other destinations in Indonesia," he said.

Head of Bali Tourism Agency, Ida Bagus Kade Subhiksu, acknowledged immigration records were showing that Bali had declining visitor growth. He pointed out that Bali's airport was connected to almost all regions in Indonesia, thus making it easy for visitors to move on to explore other destinations.

PT Garuda Indonesia operational director, Novianto Herupratomo, said that his airline fully supported the government's Bali and Beyond programme and had increased its flight frequencies and routes to new destinations.

"We will serve all destinations in Indonesia, as long as there is an airport. We will adapt to the local conditions by providing small and large aircraft," he said.

"Our passenger growth is very good, especially on domestic routes. We are making our best effort to deliver both foreign and domestic visitors to the various tourist destinations across Indonesia," he said.