Moto X is colourful, but not iPhone killer: Reviewers 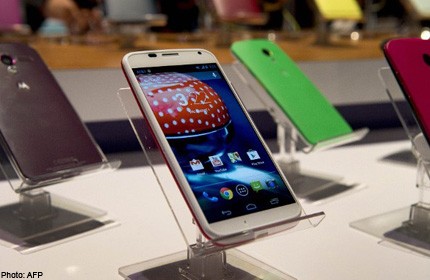 Motorola's "Moto X", the cellphone maker's first flagship device since Google bought the company in 2012, stands out in a crowded market due to its customisable colours and materials, yet stops short of being an "iPhone killer," reviewers said.

The highly anticipated Moto X is Motorola's latest attempt to break into a smartphone market dominated by Apple Inc and Samsung Electronics.

Reviews published in the Wall Street Journal and the New York Times newspapers late Tuesday praised the phone's customisable colours and materials, but said its other features were not game changing.

Walter Mossberg wrote in the Wall Street Journal that "Moto X is an innovative phone, not a revolutionary one. But it may point toward a more revolutionary future."

Mossberg highlighted that unlike other phones Moto X is always listening for voice input without the need to activate a command.

"But I wouldn't call the Moto X a game-changer, like the original iPhone was in 2007," he wrote.

Motorola, whose share of the mobile phone market has fallen to less than 2 per cent, is betting that it can win over consumers by offering a huge palette of colours to personalise their phones as well as unusual phone materials such as wood.

AT&T Inc T.N, the No. 2 US mobile service provider, will have exclusive rights to let its customers customise the phone from a selection of 18 colours for the back, two colours for the front and seven accent colours for an undisclosed time period.

Katherine Boehret wrote in a second review on the Journal that "Moto X stands out in a sea of phone sameness", praising the phone's customisable options.

Reviewing for the New York Times, David Pogue noted how Moto X detects that the user is in motion while in driving mode.