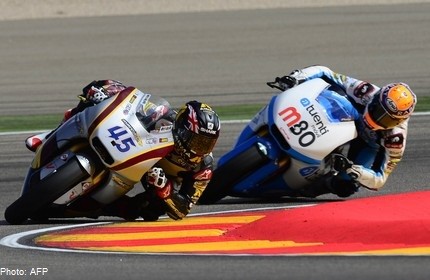 SEPANG, Malaysia - Spain's Esteve Rabat took the Moto2 victory at the Malaysian Grand Prix on Sunday after a massive five-rider crash forced the race to be restarted.

The pole-sitter won the race on his Kalex ahead of his teammate and compatriot Pol Espargaro and Swiss Suter rider Thomas Luthi.

The British Kalex rider still leads the standings with 224 points followed by Espargaro and Rabat.

The race was restarted and shortened to 12 laps, down from 19, after a crash on the first lap involving five riders.

Spanish Kalex rider Axel Pons was the first to fall in the middle of the group, tripping up the four others.

All escaped serious injuries, according to race officials.