Much abrew about Beck's beer's labelling: 'Imported' from Germany but brewed in China 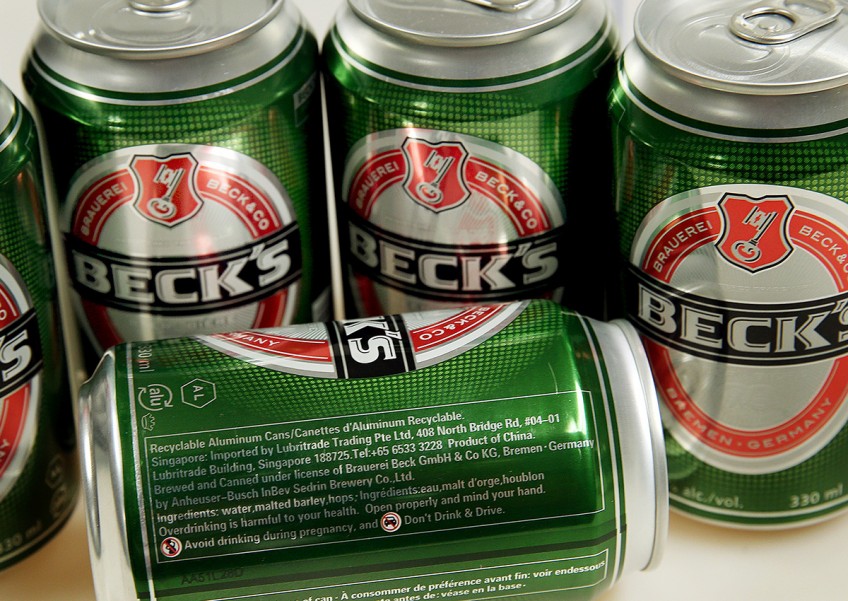 It is nothing to raise a glass to.

Beer drinkers find it hard to swallow that the six-pack Beck's premium beer, whose cardboard packaging suggests it is "imported" from Germany, was brewed in China.

"They're fooling us by insinuating it's imported from Germany," said 43-year-old Mr Tadeusz Jankowski, who has been a fan of the pilsner for more than a decade.

The British expatriate, who runs a sports website, added: "It's priced in the same range as premium imported beers, so you would expect good ingredients from Germany."

Carlsberg Singapore, the official distributor of Beck's, said it was an isolated incident involving a "technical printing error" on the outer label of its six-can pack.

It did not reveal how many packs were affected.

It emphasised that the fine print on each 330ml can, which states it is brewed in China, is accurate.

Carlsberg Singapore general manager Jimmy Toh said labels have been placed over the error as an interim measure, while new packaging for the remaining stocks is being printed.

"We are now working closely with the retailers to continue conducting thorough checks on other Beck's six-can packs," Mr Toh said, adding that the labels on other Beck's products, such as its 630ml beer bottles, are accurate.

Beck's, which originated in Bremen, northern Germany, has not been brewed exclusively in the country since it was bought by Belgium's Interbrew in 2002. It is now owned by Belgium-based Anheuser-Busch InBev.

On Thursday, supermarket chain FairPrice pulled the affected products off the shelves due to "inaccurate product information". Its spokesman said: "We are working with our supplier to bring this product back to our shelves."

The wrongly-labelled packs are still available at Sheng Siong, the only other supermarket retailer of the beer here. A can of Beck's at Sheng Siong is priced at $1.65 while a pack of six costs $9.50.

A Sheng Siong spokesman said it has not received any orders from Carlsberg Singapore or the authorities to remove Beck's from its shelves.

"We will monitor the situation and take suitable action where necessary," the spokesman added.

While there were no complaints about mislabelled food and beverages in the last two years, the association has received 46 such complaints for electrical products.

Mr Mitchell Leow, head of corporate relations at Asia Pacific Breweries Singapore, noted a recent "increasing trend" of beer being imported here without information like country of origin, alcohol percentage and best-before date being displayed. He added that there are more products with ambiguous claims about their alcohol content.

"We believe consumers should demand more visibility and relevant information on products that they buy," he said.

"Manufacturers, suppliers, retailers, consumers and the Government should work together to improve the availability of relevant product information."

In 2013, Anheuser-Busch InBev faced a class-action lawsuit in the United States, after consumers said they were tricked into thinking their Beck's beer was a German import, when it was brewed in St. Louis, Missouri.

A Miami judge approved a US$20 million (S$27 million) settlement for the case last October.

This article was first published on April 2, 2016.
Get a copy of The Straits Times or go to straitstimes.com for more stories.