Much abrew at Owl 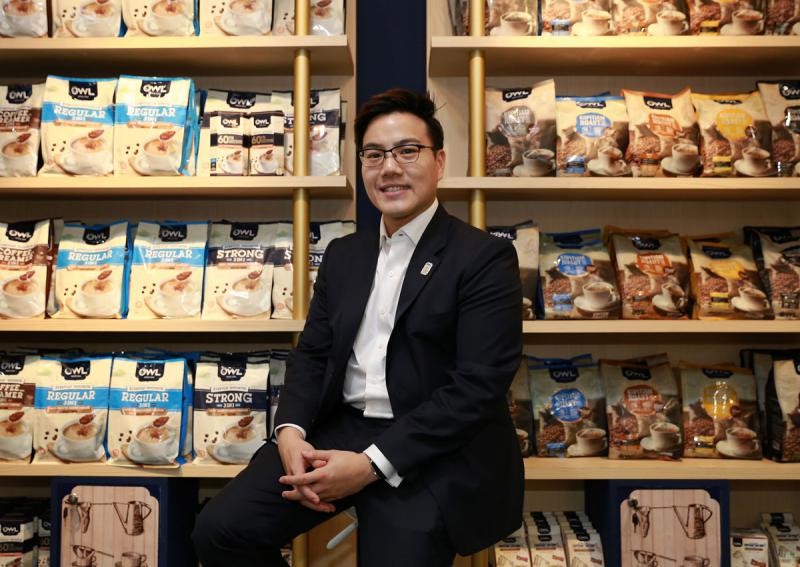 HOMEGROWN coffee firm Owl International, which marked its 60th anniversary last week, has quite a bit of history to look back on.

It had started out as Sin Hup Huat in 1956, and focused on producing traditional coffee, sold under a logo featuring an owl.

It grew as Singapore grew, and in the early 90s, it was using its first fully-automated coffee roasting plant, says its website; the company took the Owl name from its logo, and was incorporated in 1994, bent on taking Straits Asian coffee global.

The firm was acquired by Super Group in 2003, and turned into a wholly-owned subsidiary.

His 31-year-old son Richmond, now on board as assistant general manager of Owl International, is helping to write the next chapter of the Owl story: He is on the team that has rebranded Owl International as the first "complete" coffee company in Asia.

He said: "In September 2014, I had a sit-down with the management team and we created this vision - we wanted to become a 'complete' coffee company."

Realising that there were segments of the market that had yet to be tapped, Owl set about a branding, marketing and business-development offensive. The firm now occupies all parts of the coffee-supply chain - from retailing coffee beans in supermarkets to running its own chain of cafes.

"We wanted to make sure that consumers could enjoy our products whenever there is an opportunity to sell coffee," said Mr Te.

He declined to reveal revenue figures, but said Owl has been growing 20 per cent year on year since he joined the company about five years ago.

This has been a job he had been born to do, considering his pedigree. Coffee had always been a part of his life, even as a child.

"It was only natural to join my father in managing the coffee business," said the 2010 graduate in business management from the Singapore Management University.

"My background at SMU gave me a strong foundation in marketing and business strategy, and after a year at the company, I was part of the team planning a rebranding project for Owl."

Apart from expanding Owl's product range, he is also training his efforts on improving the coffee production process, given that consumers now hanker for "something better".

Mr Te said: "People are now seeking for better-quality coffee, but if we look at the instant coffee industry, we see very few players trying to push the industry toward a better-quality cup."

As part of its diamond jubilee celebrations, Owl unveiled 100 per cent freeze-dried coffee under its "Everyday Favourites" range, which typically features spray-dried coffees.

"In spray-drying, you remove moisture and you lose a lot of the aroma of the coffee in the process. Freeze-drying locks in the aroma instead," said Mr Te.

It is twice as expensive to produce than spray-dried coffee, though.

The firm, active in more than 20 countries around the globe, is also looking to deepen its international presence, even as gloomy economic conditions envelope the region.

"Coffee consumption around the world, especially in China, where demand has outstripped supply for years, has always been growing in spite of gloomy economic conditions."

It is why Mr Te is banking on marrying his "complete coffee solution" with the huge, relatively untapped market that China offers.

"The beauty of what we have created is that it can be implemented everywhere. Everywhere you go, the demand is always there."

This article was first published on April 23, 2016.
Get The Business Times for more stories.