Mushroom growth for a special product 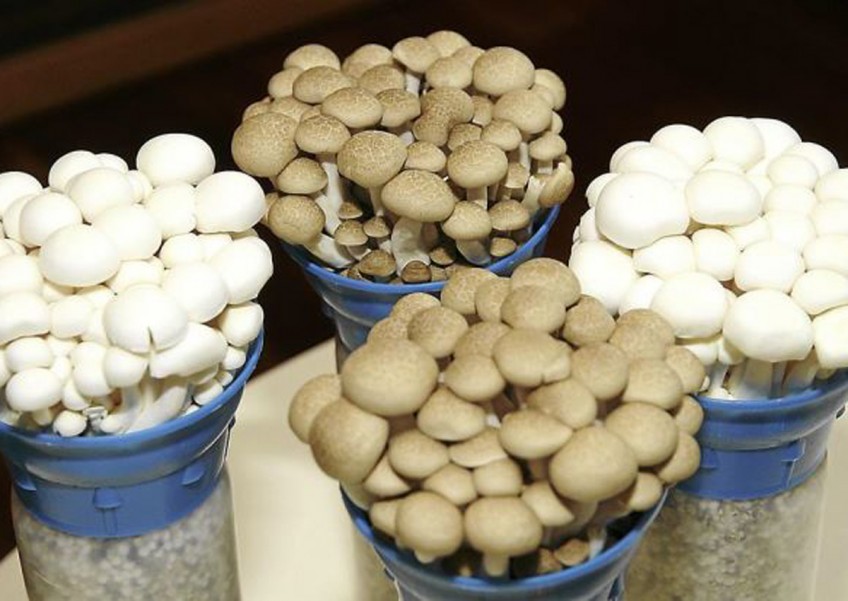 ANOTHER hi-tech, clean-room product that Singaporeans can find in the supermarkets here are Maitake, Bunashimeji and Bunapi mushrooms under the Hokto label.

The Maitake mushrooms are flown in from Japan, while the two other varieties are grown in Selangor, Malaysia, since Japan's Hokuto Corporation set up a plant under its Malaysian subsidiary, Hokto, in 2012.

The company supplies some 30 tonnes of mushrooms per month to Singapore, and demand continues to grow, says Tadao Yamamoto, managing director of Hokto Malaysia. "We've plans to develop the market for our specialty mushrooms in Vietnam, Thailand, and Indonesia," he reveals.

Asked if electronics companies' moves into hi-tech agricultural business is a cause for concern because of the increased competition, Mr Yamamoto says that Hokuto's business is in agriculture, "so it's totally different".

In Japan, Hokuto started growing mushrooms in a clean-room environment in 1990, and it only focuses on mushrooms and related products. Mushrooms are one of the most difficult to grow because of the fungi, Mr Yamamoto explains, adding that environment control in the clean rooms are also key. Hokuto uses only organic inputs, while it has a host of cultivation specialists and technical engineers for quality control.

But cost isn't low because of the facility, equipment and technology, hence it makes sense to sell premium products like the Maitake "dancing" mushrooms which are touted to have medical qualities. Known also as sheep's head, or by its scientific name of Grifola frondosa, the Maitake has high protein, rich amino acid, vitamins B2 and D2, and a variety of minerals, and has been recognised as medicinal fungi which can help boost the immune system and treat several diseases.

Could high-tech farming be the way of the future then? Most possibly, thinks Mr Yamamoto, as "weather and mother nature does not affect hi-tech farming, which ensures a stable supply".

Hokto's Maitake is currently available at all Fair Price NTUC hypermarkets and supermarkets, and it's also supplied to hotels and Japanese restaurants throughout Singapore.

This article was first published on November 14, 2015.
Get The Business Times for more stories.