Music and environment can affect how you taste whisky 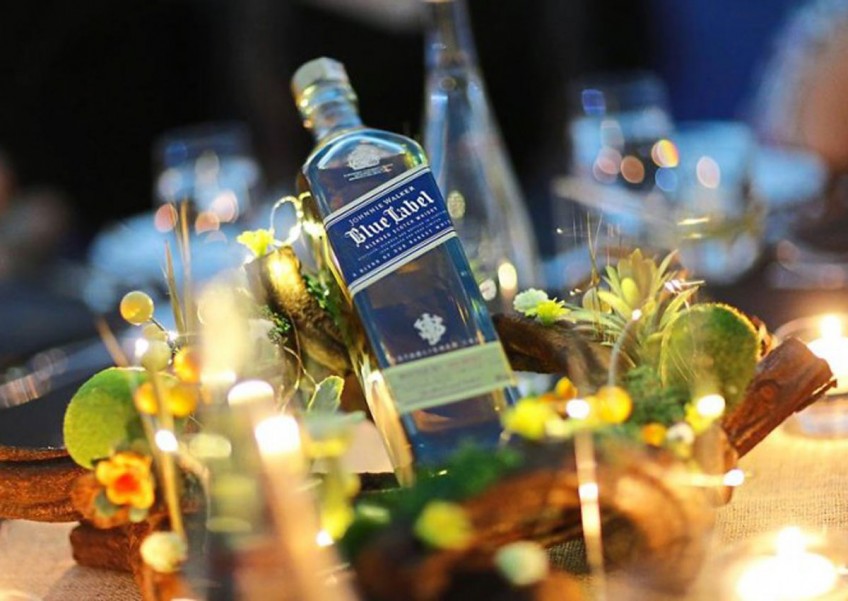 The light dimmed and gradually, the chiming sounds of the majestic Flavour Conductor starts to fill the room. As the music begins to gain momentum, the commanding voice of Johnnie Walker global ambassador Tom Jones booms out, instructing us to take a sniff from our glass of Johnnie Walker Blue Label.

Like an orchestra conductor, Jones' arms flail around dramatically, as he describes the rich, silky, honey flavours of Blue Label in between sips of the golden liquid, bringing forth images of chocolate melting in your mouth, highlighting the signature smokiness of the whisky, and the rich spices awakening in your senses.

As he speaks, the colours of the organ shift constantly - from red, yellow, to shimmering gold - and the flavours on our tongues dance playfully with the music, going from soaring, bell-like chimes for the lighter, fruitier tastes, down to deeper, powerful tones to go with the peaty, smoky notes.

Needless to say, the Johnnie Walker Blue Label Symphony In Blue was a whisky tasting like no other, blending sound, smell, and taste into one unique experience.

Held at a specially constructed satellite dome in Genting Highlands, Pahang, Symphony In Blue is the culmination of three years of research by Johnnie Walker into how environment, atmosphere, and music can affect one's appreciation of whisky.

According to Jones, the project came about when he and the team at Johnnie Walker were wondering about how to change the way they did tastings.

"Most of the time when people do a whisky tasting or talk about whisky, it's a bit formal and a very classroom-like scenario, with someone showing you a PowerPoint and telling you what to experience. We felt very much that people need to make their own impressions about what the whisky tasted like," he said during an interview after the event.

"With Symphony in Blue, it's all about stimulating the mind so that people came up with their own feelings about the flavours, rather than being told what to feel."

Working with sensory expert Professor Charles Spence of the Oxford University, they found that they could actually manipulate how people respond to the whisky by using different types of music, lights, and colours.

In July 2013, Jones met music composer Simon Little in London and had a little chat about the whole idea of matching music and whisky. That was the start of what would become Symphony In Blue, with Little composing the musical score that would accompany Jones during the presentation.

"The music you listen to while drinking whisky can affect what you think of the whisky as well. Not necessarily the type of music, because everyone likes different styles of music," he said. "Very early on, there were certain stereotypes of music we wanted to avoid. We didn't want a recognisable piece of music, for example, Beethoven's Fifth Symphony. We wanted to make sure the music wasn't recognisable or associated to anything else, because it was the effect of the music we wanted, rather than what the music was."

The Flavour Conductor itself was created by Sam Bompas and Harry Parr, who specialise in creating "immersive flavour-based experiences" that have included a breathable cloud of gin and tonic, and the world's first multi-sensory fireworks.

But how are people supposed to feel when he does his whole dramatic presentation, while the Flavour Conductor is doing his shiny, shimmering, splendid light and sound show? "Here's the thing - we don't really care. But they're supposed to feelsomething," said Jones matter-of-factly. "When you're just standing in a room with a guy going, 'this is whisky number two', you don't feel anything. You're just listening to something. But with Symphony In Blue, we won't know what people will experience, because it's their experience. That's what we're trying to create.

"We're not trying to push a specific emotion on people - it's more to elicit a response for people to experience it for themselves. Ideally, of course, the response would be that they enjoy Blue Label, but actually, we don't know what they feel - that's the whole point."

"For instance, in Genting, where we are now, it's quite cool and quite misty, so it's quite close to Scotland. So if we were to drink a Blue Label right now, and then drive straight down to KL and tasted it there, it would taste spicier. In a warm, humid environment, the spicy notes in Blue Label are amplified," he said.

Thinking back to how he used to conduct whisky tastings, Jones now understands some of the responses got were because of how the room was set up, what the temperature and lighting were like. "I did a whisky tasting years ago in a cellar and it was horrible. There was no natural light in the room, it was really dull, and there was no atmosphere. Now I know why - everyone was just sitting around underground, under harsh fluorescent lights, not a lot of fresh air... so it was no surprise that we didn't get a great response," he recalled. "Now, we choose our environment differently, thinking about the colours that are in the room, so all those things plays a part. And that would influence everything that we do, moving forward."