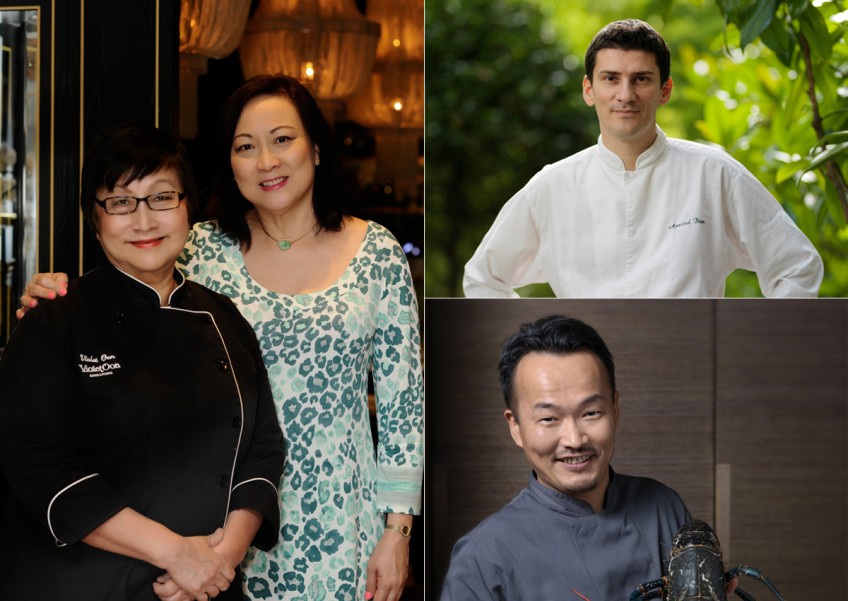 One sings, the other plays the violin and both are superb cooks.

For the 20th anniversary of the World Gourmet Summit, Violet Oon and Lynnette Seah are teaming up to cook a Peranakan feast of more than 10 classic dishes, paired with Austrian wines.

Called A Culinary Symphony With Austrian Wines, the event is one of the highlights of the annual epicurean festival, which runs from March 28 to April 24.

Peranakan cooking doyenne Oon, 66, who has two restaurants, National Kitchen By Violet Oon at the National Gallery Singapore and Violet Oon Singapore in Bukit Timah Road, will team up with Seah, the co-concertmaster of the Singapore Symphony Orchestra, for a one- night-only event.

The event, which is on April 2 at National Kitchen By Violet Oon at the National Gallery Singapore, costs $250+ a person and is limited to 65 people.

Besides showcasing their culinary prowess, they will also serenade diners with four songs, including popular Malay folk song Bunga Sayang by Singaporean composer Dick Lee, with Oon on vocals and Seah playing on her 1750 Gabrielli violin from Florence, Italy.

Seah says the event marks a serendipitous reunion with Oon, as she attended her cooking classes 25 years ago.

She says: "Violet taught me how to cook claypot chicken rice. Cooking is my other passion. It is a real honour and it's exciting to step into the professional arena and cook in an important food event."

Oon, a former opera singer, adds that in line with the Austrian wines served, the event is styled after wine taverns, or heuriger, where she "bonded with strangers through great food, music and fellowship" during her trips to Vienna.

She says: "This soiree intertwines our cooking and music talents. It also kick-starts my restaurant's programme of collaborating with Singapore's culinary talents, who need not be professional chefs, but have built up a reputation of cooking great food at home for friends or for parties."

The World Gourmet Summit is organised by A La Carte Product- ions, a division of food consultancy Peter Knipp Holdings, and supported by the Singapore Tourism Board.

Mr Peter Knipp, chief executive of Peter Knipp Holdings, says: "The real heroes in our food scene are our local talents who have made a name for themselves here and abroad.

"Over the past 20 years, the summit has brought in more than 200 foreign chefs, which have inspired, educated and developed our chefs. It has created a culinary exchange that has made Singapore the culinary capital of South-east Asia."

Other events include a Hong Kong Street Party where 28 Hong Kong Street bar and restaurants such as Bacchanalia, FOC and Vasco - all located along that street - will team up with The Butchers Club in Clarke Quay to serve burgers and cocktails on April 3.

International chefs will also be in town for the summit.

There will also be a four-hands dinner in Odette at the National Gallery Singapore, which features the restaurant's chef-owner Julien Royer and French chef Arnaud Bignon of two-Michelin-starred The Greenhouse in London.

The event line-up was announced at a press conference yesterday. Ticket sales for the events will start from March 1.

This article was first published on February 25, 2016.
Get a copy of The Straits Times or go to straitstimes.com for more stories.