My goal to save money 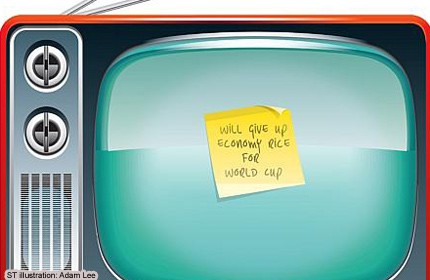 Let's start with a bit of good news for a change. Remember four years ago when the country nearly suffered a heart attack about the possibility of not being able to watch the World Cup on TV?

Well, we can all breathe a sigh of relief because a deal has been signed now, well ahead of the competition in June.

And without having to worry about existential questions like whether or not we would even get to watch it, we can now focus all our energy on complaining about how much it is going to cost.

Because here's the bad news: All our fears about the fiasco of 2010 having spoilt the market permanently for Singapore football fans have come true. Most of us are now going to have to pay more to watch the World Cup 2014. Depending on whether you currently subscribe to cable TV, the price of watching the World Cup could be anywhere from $0 to $285.25.

The $0 option, of course, comes with the catch of having to sign up for a two-year contract to watch the English Premier League. You know mobile phones are so expensive now that telcos subsidise the cost when you sign up for a contract to make your phone more affordable?

Well, it seems we have reached that same place with World Cup matches.

To help you make the decision of whether or not to cough up the cash for the World Cup, I have prepared a simple Q&A that deals with all the major issues.

I don't care how much it costs. The World Cup is more important to me than life itself. Do you have any advice for me?

Well, I think you may need to get a little perspective. More important than life itself? We are talking about 22 men chasing a ball here.

You didn't let me finish. I meant do you have any advice for me on how to save money so I can afford to watch the World Cup.

Oh, why yes, of course. Let's assume you are not an existing subscriber and will have to stump up $285.25, all in, for the package. While this looks like a tremendous amount of money, it's not that much if you break it down.

Let's say, you eat a plate of $3 economy rice every day for lunch. If you were to decide you would no longer have lunch, you will easily save the $285.25 in just a little over three months, just in time for the start of the World Cup.

And if that sounds like too much of a sacrifice, if you were to forgo a $5 Starbucks latte every day, you would hit your target in as short a time as two months.

But I don't drink a latte every day.

Then you better start soon, otherwise you won't be able to give it up in time.

Explain something to me.

Four years ago, when we had to pay a ridiculous amount of money for the World Cup, that was supposed to be because of the bidding war between the two cable companies and also the fact they didn't have a lot of time to organise sponsors. Surely we have learnt from that episode?

Pardon me, but this just shows how naive you are. The last time the bidding war to secure exclusive content pushed up prices and nearly jeopardised the possibility of a deal, there was widespread public outrage to the extent that the Government had to get involved.

And since everybody hated it and it didn't make sense, it should come as no surprise that the only option the cable companies had this time was to do exactly the same thing. So SingTel now has exclusive rights again, which it will have to share with StarHub customers, but it has the added advantage of trying to use it to sell English Premier League contracts.

Is there any chance that the higher price will mean better service?

Well, we will have to wait until the games actually start to see what sort of service we get, but rest assured there are already some value-added elements. For instance, customers will be able to access all the games live on their mobile devices - a tremendous help for the thousands and thousands of football fans who tend to be outside the house at 3am.

Of course, I'm not being fair here. I can think of at least one situation where it is useful to have access to games on mobile devices. Let's say you got up to watch the game and just at a critical moment, nature calls…

Er, thank you, there is no need to elaborate. Do you see any way the price might go down?

At this stage, the only way we are going to get a more affordable World Cup is either to have Singapore host it or to have the Singapore national team qualify, in which case I think a strong nation-building argument can be put forward as to why the cable companies can stop fighting each other over this for a while.

So, basically, no, the price is never going to go down.

That's terrible. If I want to take a stand against this, should I boycott the World Cup? Would that make a difference?

No, don't waste your time. This is the World Cup we're talking about. You know you are not going to successfully boycott it. Everybody knows that. It may be easier to give up economy rice.