Myanmar Beer undergoes facelift as it takes on new rivals 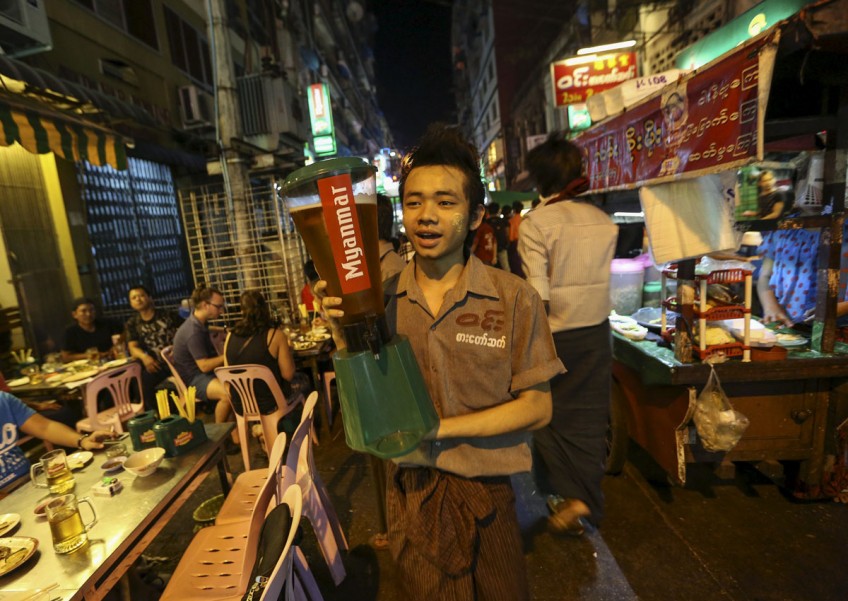 YANGON - Drinkers buying a beer at Yangon's roadside bar shacks used to face a limited choice: more likely than not, they would order a mug of Myanmar Beer, sometimes with a shot of coarse whisky to give the light local brew an extra kick.

These days there is more variety, thanks to the arrival of Denmark's Carlsberg and its Dutch rival Heineken , which began brewing in Myanmar this year as economic reforms uncorked a market protected under military rule.

Just months after opening, Heineken is doing so well it plans to double capacity at its Yangon facility to 50 million litres from 25 million litres, said Lester Tan, managing director at the APB Alliance Brewery Company which produces Heineken.

The company has accelerated an expansion plan it had expected to execute after three or four years, he said. "Heineken volumes have just gone through the roof, it has taken us all by surprise," Tan said.

Still, Myanmar Beer commands about two-thirds of the country's beer market by volume.

And the company has not sat complacently on its market dominance - like other state-backed firms, MBL has moved swiftly to overhaul both its image and products to appeal to Myanmar's new consumers. "

There are a lot of the challenges in the market," said Hiroshi Fujikawa, who became MBL managing director this year after Japan's Kirin purchased a 55 per cent stake for US$560 million (S$791 million) from Singaporean firm Fraser and Neave (F&N).

"One is that Heineken and Carlsberg came into this market this year and launched premium and local beer products. So the competitive situation in the market will definitely be changing and be more and more fierce."

While Heineken and Carlsberg were building their breweries, MBL rolled out a sleeker bottle, ramped up its promotional efforts and began targeting a younger generation by sponsoring hip-hop and electronic dance music concerts, a work around to the country's strict ban on alcohol advertisements.

The history of investment of foreign brewers in MBL - even during sanctions - has helped keep it in contention. Kirin's purchase came following a dispute between F&N and Myanma Economic Holdings Limited (MEHL), a military-backed conglomerate that holds a 45 per cent stake in the brewery. F&N had been involved in the firm since the mid-90s.

As in other industries in Myanmar's emerging economy, one of the biggest challenges to growth for the brewers is finding skilled workers. "If I take a look at the individuals, the workers here, there is a lot of potential to be improved," Fujikawa said of MBL and MEHL. Kirin has started taking staff to Japan for training, he added.

MEHL is one of the country's two major military-backed conglomerates with sprawling interests in industries ranging from gem production to supermarkets. Its profits help fund pensions and welfare for members of the armed forces and their families.

MEHL is targeted by US sanctions, which prohibit US businesses from working with the group.

Japan's firms have not been subject to similar restrictions, but Fujikawa said that he was aware there was reputational risk for Kirin in working with the group.

A NEW GENERATION OF DRINKERS

Research firm Euromonitor International estimates the US$375 million market will quickly grow to be worth US$675 million in 2018. The country's 51 million population consumed an average of 3.2 litres per person in 2013, a tenth of the volume washed down in neighbouring Thailand.

Capturing the loyalty of the growing number of young drinkers will be as important as keeping the existing customer base, said Fujiwaka. "We have to be innovative," he told Reuters. "They do not want to drink what their fathers drank." MBL plans to introduce a new premium beer to compete with Carlsberg and Heineken's play for the pricier market.

MBL is not alone in responding to the threat from challengers who until recently were locked out of the country.

MPT plans to start selling pre-loaded SIM cards to tourists for a couple of dollars, unthinkable just a few years ago when a SIM cost hundreds of dollars and mobile phones were a rarity.

State-run Myanmar Airways rebranded itself as Myanmar National Airlines last year. It has upgraded its fleet and added international routes.

One of the few reminders of the company's past is its airline code, UB, a throwback to the country's former name, Union of Burma.