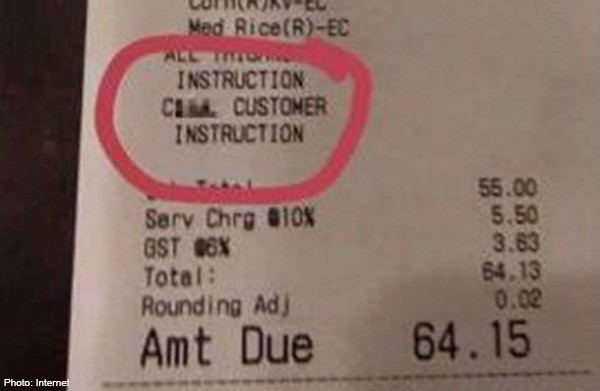 PETALING JAYA, Malaysia - This time, the joke was on them. A restaurant chain known for its flame-grilling humour has sacked one of its employees for using vulgar language in a receipt to customer.

Nando's came to the decision after a photograph of the receipt issued by Nando's IOI City Mall branch on May 17 was shared widely on social networking sites.

In the receipt, the customer is called "female genitalia" in a Hokkien derogatary term. Why this happened, it is unsure.

"Dear friends of Nando's. This incident has ruffled all our feathers at Nando's and we do take matters like these very seriously. As of today, the staff in question has been officially terminated from employment.

"We thank all of you for your support and we apologise on behalf of our staff for any offence he may have caused anyone else," Nandos said in a comment on it Facebook page.

Nandos, which is known to take digs at current events and its rival chains in its ads, found itself being roasted in social media after the photograph was shared.

The manager on duty at the time has apologised to the customer and managed to get her contact details as well, it said.

"We actually dropped a call and contacted the customer and apologised to her. We take this matter very seriously and we would like to thank you for taking the time to inform us about this," it said in a reply to another comment about the incident.

Facebook users had taken Nando's to task over the incident, saying the company should apologise for the behaviour of its staff. Some even asked if the term was given for paying the 10 per cent service charge.

There were also those who defended the restaurant, saying the service they encountered there was really good.