The national IT project that went global in a big way 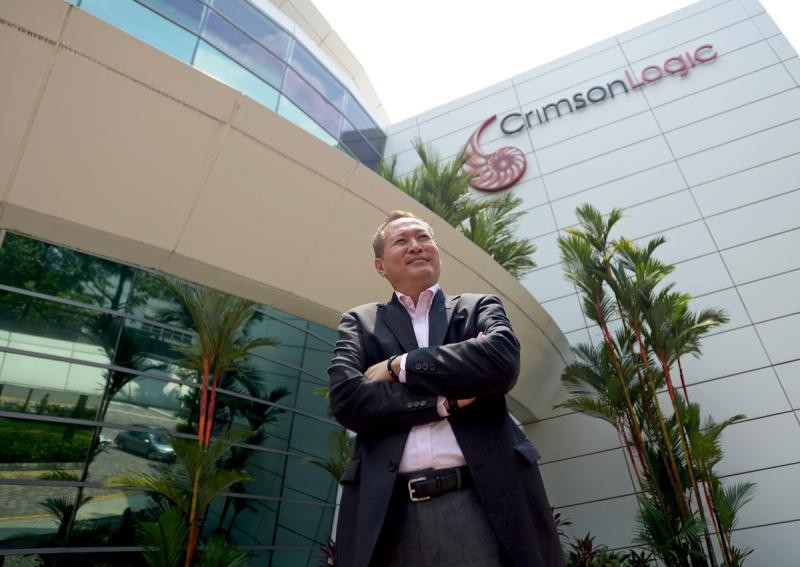 Venturing abroad to seek growth can be risky business, but some Singaporeans have made it work. In the third of a three-part series, Mr Saw Ken Wye, chief executive of CrimsonLogic, tells why the firm that began as a national infrastructure project now prefers to hunt on its own terms in Africa and the Middle East.

When Mr Saw Ken Wye began his 14-year career at the National Computer Board in the 1980s, Singapore had just drawn up its very first National IT Plan to give the economy a good jolt in the wake of its first recession in 1985.

"There was a battle cry of exploit IT, export IT," recalled Mr Saw, and the most ambitious piece of that plan was to accelerate trade through Singapore by transforming the paper-based trade documentation system into a digital one.

To build that system, CrimsonLogic, then known as Singapore Network Systems, was formed in 1988.

A year later, the first phase of TradeNet went live, and trade declarations that used to take two to five days to clear were processed in minutes through a single window connecting users to Singapore's multiple controlling agencies.

"TradeNet gave us the opportunity to understand the flow of information throughout systems, electronically. So we took that notion and said: 'Besides trade, what's the other industry that has tons and tons and tons of paper?' Legal," said Mr Saw.

In 1997, CrimsonLogic launched an electronic filing system for the Singapore court system, and the firm kept on pushing - into e-citizen services with SingPass in 2006, and into business licensing systems after winning another government tender here in 2011.

With all that tech under its belt, "exporting IT" was no longer an instruction but an instinct for CrimsonLogic.

Today, the firm has projects in more than 30 countries, and derives nearly 60 per cent of its revenues from overseas. About a third of CrimsonLogic's 800-strong team is based out of Singapore.

And since Mr Saw took the helm in 2013, CrimsonLogic has also embarked on a massive project of its own, one that was not handed to it by any government.

Think of GeTS as a special window where instead of filling out various forms to apply for a visa to one country at a time, you fill out only one form that lets you apply to multiple embassies at once.

Let that "visa" represent all the paperwork needed to describe the goods you want to send across borders, and the benefits for freight forwarders, shippers, retailers and consumers are tremendous, he said.

"With the rise of e-commerce and online shopping, there's a lot of small packages flowing. How are you going to cater for that? The systems that were built for large consignments are not efficient enough for the small things," he said.

GeTS, which is sold to firms as a software-as-a-service model, will help firms clear Customs more quickly, and provide a suite of other services such as data analytics.

"We focused on GeTS as a growth engine two years ago, and we've seen our transactions grow nearly two-fold over last year," he added.

We went to Panama, the Middle East, Africa; we had good successes there so we continued that way. So unlike most Singapore companies whose first natural expansion would be into ASEAN and then China, we went West and we kept going West.

Q Why not go to ASEAN first?

A We tried, but I think we found it was tougher. For our kind of projects you need strong sponsorship, good stability.

So, at that time, Thailand wasn't that great... Indonesia has this weird system where budgets must be approved every year, but some of our projects are multi-year ones.

We realised that all the opportunities came with countries which had vision, which had drive, had sponsorship. So Mauritius was one, Saudi Arabia was another, and Panama.

Q Was CrimsonLogic's overseas push a mandate from International Enterprise Singapore, which has a 55 per cent share in the company?

A No, it was part of our growing up. And I think in Singapore, nobody owes anyone a living. Although we may be owned by Government, we compete and we fight with private-sector firms and multinational companies. So our opportunity was to see whether we could take solutions we have in Singapore, beyond Singapore.

Q So which is a market where you make good margins?

A Outside Singapore, all markets. Overseas, (e-government is) all new, and I carry the Singapore brand. In Singapore we don't compete for all projects. I'm very selective in where I bid and play. Pricing in Singapore is very, very competitive. It's a well-known fact.

I still need to find showcase projects from Singapore, but you also need to be smart enough that you don't end up in this cycle of bidding so aggressively to win a project that you lose money.

Q Cost-wise, how do you stay competitive?

A We're trying to bring down customisation costs. In the past, 70 to 80 per cent of a project was customisation.

Now we're trying to flip it the other way, to 20 or 30 per cent customisation.

You do that by starting to put more domain knowledge into the product, to build a baseline so you make it more repeatable.

Now, when I talk to customers, I say this is how things can be done.

Does it fit what you do? Or what more do you want done that's slightly different?

So I changed the conversation from requirements gathering to gaps analysis.

Q So Singapore is not a core market for you anymore?

A In terms of revenue, it's less than half. I have a strong Singapore core because my research and development is here, my strategies are all from here. But for the next stage I have to go global in a big way.

This article was first published on May 2, 2016.
Get a copy of The Straits Times or go to straitstimes.com for more stories.