Navigating work when you are socially awkward 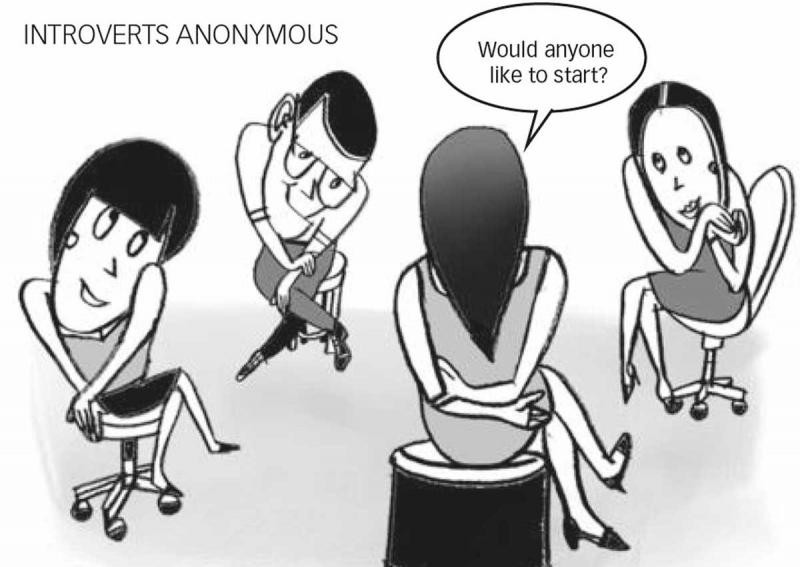 Singapore - Have you ever attended a cocktail event and found yourself standing uncomfortably alone while everyone was mingling? Or stood at the water cooler fumbling for words to say to a colleague whom you see every day in the office?

Call it shyness or introversion or just plain social awkwardness, it affects more people than we realise.

Contrary to popular belief, such people are not emotionally deficient in any way. They still desire to connect with others, but may lack the skills or knowledge to do so in a socially appropriate way. What comes naturally to others is highly stressful and perplexing to them.

Instead of swinging to extremes by either trying too hard to be extroverted or avoiding social situations altogether, there are ways to overcome these weaknesses, while still being authentic.

Being socially awkward doesn't just affect how you feel, it may cause you to lose out at work, says Jennifer Kahnweiler, author of The Genius of Opposites, Quiet Influence, and The Introverted Leader. "If socially awkward people are not building key relationships with influencers, they are passed over for promotions and projects that build their portfolios," she tells BT.

Trying to compensate with performance can go only so far. "All else being equal, the one who stands out is the one who is socially affable or likeable," says Regina Chua, executive coach at Discipline Dynamics.

Functional competency is not enough if everyone has it. And as a leader, one needs to be able to effectively influence others, manage teams, and get buy-in.

So if you are socially awkward, your ultimate performance comes to a plateau, says Ms Chua, who describes herself as a deep introvert in a field of "natural extroverts".

Despite climbing to the ranks of senior management during her first 15 years in the corporate world, Ms Chua says she "did not do well" in the social aspect. "You see groups of people having a great time talking, but I never quite fitted in even though I tried . . . If there were tasks on the table, I could talk shop - no problem. But if you put work aside, and there was nothing on the agenda, I struggled," Ms Chua recalls.

Being clumsy socially led to several misunderstandings in those 15 years. She came across as being transactional at work ("you talk to me only because you need something") because she did not realise the need to connect and build rapport. And she adds that for introverts who are very good in their craft, they can even be seen as aloof or arrogant. "Introverts need more time to warm up - but in the corporate world, people can't adapt to you," warns Ms Chua.

This can affect your performance appraisal if your boss mistakes your quietness for passiveness or, worse, an "attitude issue".

At meetings where people are fighting to make their views heard, having a minimal voice can be interpreted as having minimal views - and that's dangerous, says Ms Chua.

But just because you are shy or awkward doesn't mean your potential is limited and that you can't have a successful career.

For people struggling to change, Ms Kahnweiler's advice is to embrace your natural strengths and don't try to become an extrovert if you aren't.

She says wallflowers are often listening, and observing the world around them. As a result, they can have deep insights as they tend to see the big picture.

Such strong powers of reflection can be used to their advantage by planning and practising in advance, be it for a meeting or a networking event. "In corporate scenarios, these are important moments where you need to make a good impression and start building your network. You need to build rapport and be prepared," she says.

For people who are not naturally socially savvy or affable, having a structure about what you want to say to others during such situations can provide confidence, and it helps them relax at the same time.

Ms Chua does her homework beforehand by writing down possible questions she could ask in different scenarios. "People would ask if such an approach is contrived, but I say no - it's prepared and intentional, so I won't say the wrong thing," she explains.

Faking extroversion is unsustainable in the long term as people will see through you, and it does not get to the root of the problem.

Introverted people should instead make use of their strengths. For example, in fast-paced meetings where everyone is talking and no one is listening, an introvert can actually calibrate and pace the conversation. "Saying something like 'hold on - allow me to summarise and consolidate where we are at right now'. This measured, intentional response calms people down and brings clarity," says Ms Chua.

She also suggests having one-on-one conversations with your superior to share how you work and discuss the "rules of engagement" to prevent any misunderstandings.

Socialising and forming relationships at work may cause introverts much anxiety. But the good thing is that it is like a muscle that you can develop and make stronger, says Ms Kahnweiler.

It is necessary to push yourself just enough so that it is uncomfortable, such as by setting goals on how many people you would like to connect with or how many social events you will attend on a week-by- week basis. At social events, Ms Kahnweiler suggests getting introduced by others who are more extroverted. With experience, you can soon do it on your own.

Ms Chua also points out that socially awkward people shouldn't use it as grounds for getting out of work situations, such as presentations or customer service. "You may find it difficult, and it doesn't come instinctively to you. But you cannot use introversion as an excuse," she says.

While you may not be the smoothest talker or the life of the party, there is much value in a genuine, sincere colleague or boss who is a good listener and thinker.

And with preparation, practice and the right intent, the socially awkward can move from being overlooked and underappreciated, to thrive and shine at work instead. "There's such a thing called quiet leadership in a VUCA (volatile, uncertain, complex, ambiguous) world, and it is this steadiness of character that is very powerful," concludes Ms Chua.

This article was first published on July 9, 2016.
Get The Business Times for more stories.