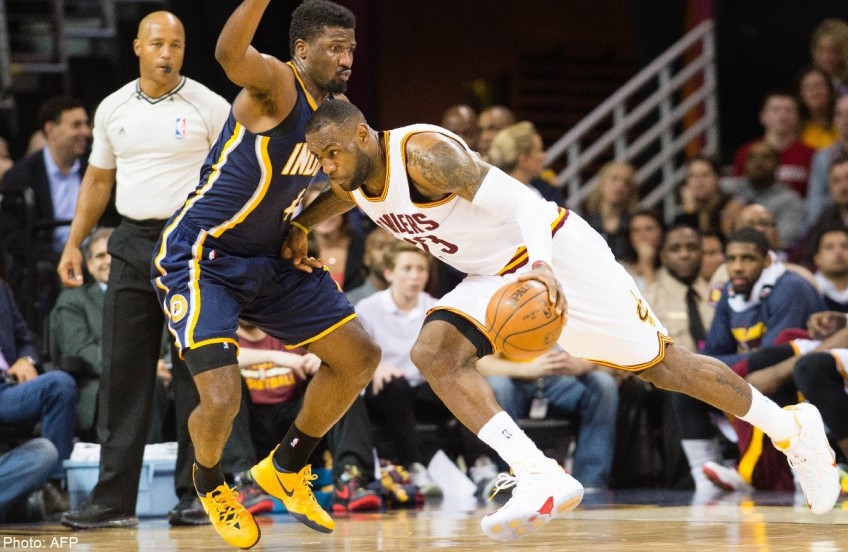 LeBron James #23 of the Cleveland Cavaliers drives around Solomon Hill #44 of the Indiana Pacers during the second half at Quicken Loans Arena on March 20, 2015 in Cleveland, Ohio.

CLEVELAND - LeBron James is headed back to the NBA playoffs with the Cleveland Cavaliers.

An ailing James scored 29 points and Cleveland held on for a 95-92 win over the Indiana Pacers on Friday to clinch a playoff berth.

It's the first time the Cavs have made it to the post-season since "King" James departed Cleveland for Miami after the 2009-2010 season.

But he returned this season to Cleveland, vowing to bring the city a major sports title, something no pro team has done since the NFL's Cleveland Browns in 1964.

He said just getting to the post-season was something to savour for teammates such as Kyrie Irving and Kevin Love, who have never done it before.

"It's a huge accomplishment for our team," he said. "For me, I don't look too far into it, but for guys who have never been in the post-season, they shouldn't take that for granted and overlook that.

"It's a huge thing for those guys, and I was happy to be a part of their first clinch." Love added 11 points and 13 rebounds and Irving scored 13 for the Central Division-leading Cavaliers, who have won six of their last seven.

James played despite missing Friday's shoot around with a bad head cold and scored 20 of his 29 points in the second half - 13 in the fourth quarter.

He took a break in the locker room early in the third quarter, and said he didn't have his usual stamina.

"He was sick and certainly could have made an excuse but did not," said Cavs coach David Blatt. "He wanted to play, and we let him go." George Hill led the Pacers with 24 points and Roy Hibbert added 20, but Indiana lost their fourth straight after a season-high seven-game winning streak.

Cleveland led much of the night, but a three-pointer from Hill with 6:46 to play in the third put Indiana in front.

It was tied going into the fourth and James took charge.

His three-pointer from the right side gave Cleveland the lead with 4:42 remaining.

The Pacers regained the lead one more time, but James responded with a basket that gave the Cavs the lead for good.

"Any time you play Indiana, it's like that," said James. "Every possession counts, and that was one of those types of games."