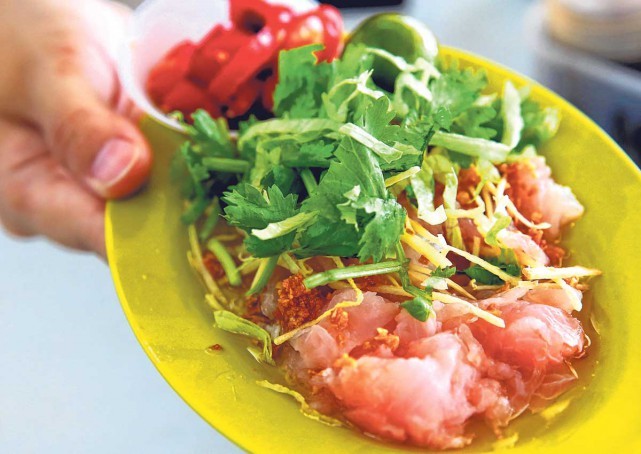 SINGAPORE - The use of freshwater fish has been banned with immediate effect in all ready-to-eat (RTE) raw fish dishes sold by retail food establishments.

The National Environment Agency (NEA) said in a statement on Dec 5 that tests conducted by the Agri-Food & Veterinary Authority of Singapore (AVA) and NEA found that such fish had significantly higher bacterial contamination than saltwater fish, and are likely to present higher risks of infection when consumed raw.

"The ban will help protect consumers and give greater peace of mind to the public, especially during the upcoming Chinese New Year season when consumption of raw fish in yusheng dishes is expected to increase", NEA added.

All retail food establishments that wish to sell RTE raw fish dishes, such as yusheng dishes, can use only saltwater fish intended for raw consumption which are typically bred or harvested from cleaner waters, and stored and distributed according to appropriate cold chain management practices.

These fish must also be handled hygienically throughout the supply chain and kept separate from other fish intended for cooking, to avoid cross contamination.

Most fish sold at Singapore's wet markets, fresh produce section of supermarkets, and fishery ports do not meet these conditions, and should not be eaten raw, said the NEA statement.

AVA and NEA will conduct engagement sessions over the next few weeks to help fish suppliers and retail food establishments understand the requirements for sale of fish intended for raw consumption.

In addition, NEA's surveillance data indicate that such fish sampled from restaurants have low levels of overall bacterial contamination.

NEA will tighten surveillance of all restaurants, and continue to enforce against errant food operators.

While investigations did not detect Type III GBS ST283 - the strain of GBS associated with the recent spike in human cases - in sashimi sold at retail food establishments, members of the public should note that there are always risks involved in consuming raw fish as harmful bacteria and parasites may be present, said NEA.

Vulnerable groups of people, such as young children, pregnant women, elderly persons, or people with chronic illness, such as diabetes, should avoid the consumption of raw fish.