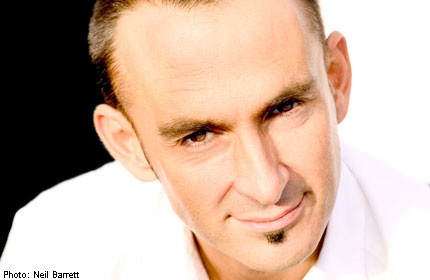 When Neil Barrett decided to leave his position as chief menswear designer at Prada in 1999 to start his own namesake label, he was filled with trepidation.

"It is probably the biggest challenge I've faced so far," says Barrett in an e-mail interview. He opened his first Blackbarrett store, a diffusion line, here in March.

"It was so risky to leave a company like Prada and set out on my own, especially with so much competition."

His worries were unwarranted. That year, he launched his eponymous label to critical acclaim. His minimalist aesthetic, combined with the use of luxurious fabrics, was well-received by both fashion critics and international buyers.

The 48-year-old Briton was at Prada for five years and is credited with starting the brand's menswear line in 1995.

Before joining the Italian luxury label, Barrett, newly graduated from London's prestigious Central Saint Martins School of Art and Design as well as the Royal College of Art, had cut his teeth at Gucci. He spent five years as the label's senior men's designer.

"Spending more than a decade at both Prada and Gucci moulded me into the designer I am today.

Where better to learn about the industry than at these two major companies?"

Barrett's debut collection for his own label was bought by a Japanese fashion distribution company. Within a year, he had opened his first stand-alone store, in Tokyo, Japan.

Three years later, in 2002, he staged his first runway show, at Men's Fashion Week in Milan.

Born in Devon, England, the bachelor comes from a family of master tailors and is the fourth generation to follow in those footsteps.

He recalls: "My family's business began at the end of the 19th century and we specialised in military tailoring. That's the root of my life's passion and inspiration."

Having grown up surrounded by tailors, Barrett has a very specific idea of style.

"It should reflect one's character. To me, style is about knowing how to put together a look with a nonchalant ease."

This "nonchalant ease" is reflected in the clothes he designs. It is also what makes his designs popular with Hollywood's leading men.

One of his proudest moments, he adds, was when the Italian football team won the 2006 World Cup Championship. Barrett, in collaboration with German sportswear label Puma, had designed the team's jerseys, as well as formal wear.

In an interview with Japanese lifestyle journal Tokyo Weekender that year, Barrett said: "I was so proud and elated that night. There were tens of thousands of Italian supporters wearing T-shirts with my name written on the outside."

Today, Barrett has four stand-alone Neil Barrett stores - two in Tokyo, one in Hong Kong and another in Shanghai. He also has five Blackbarrett boutiques, located in Hong Kong, Shanghai, Taipei, Sendai and Singapore.

Singapore, he says, has always been a market he wanted to explore.

"My previous distribution agreement was only for Japan and Hong Kong. Now, with Club 21, I'm hoping to have a greater presence here."

Despite his expanding business, Barrett still wants the focus to be on the clothes.

"I want to continue making garments that flatter my customers. It is all about the attention to fit and detail. That is what I am known for and I won't compromise on that," he says.

1. What is your biggest pet peeve about men's dressing?

2. What are three essential items a man needs in his wardrobe?

A great black leather jacket. It can be either a bomber jacket or a biker jacket. It is essentially masculine, timeless and sexy.

Also, an endless supply of great-fitting, crisp white T-shirts, or tees in classic colours, such as black, grey and blue.

Lastly, a black tailored tuxedo. Having a tuxedo jacket means you are always ready for any occasion. It can be worn with its suit pants or jeans.

3. Apart from your own creations, what is the one thing you wish you had designed first?

I would love to have discovered the workmanship in compact knitwear that was made famous by Azzedine Alaia for women. I think that technology is incredible and timeless.

4. Who do you think is the world's most stylish man?