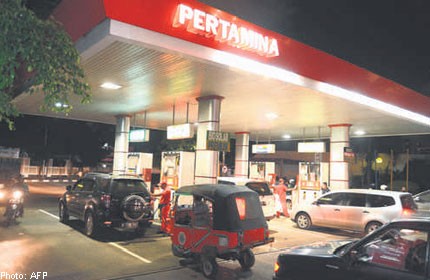 Motorists at a Pertamina petrol station in Jakarta. The Indonesian state-owned oil company has extended the term of its president-director Karen Agustiawan, formerly a private sector executive, by another five years for her significant contributions which helped the company acquire BP's North-west Java concession and recruit the oil giant's highly trained team to go on managing the offshore block.

SINGAPORE - Don't say it too loudly because it might upset the bureaucrats, but over the past five years, go-ahead private sector executives have been changing the corporate culture and turning around the fortunes of a clutch of Indonesia's state-owned enterprises.

Listening to them talk is like a breath of fresh air. They are energetic, full of ideas and anxious to make a difference in the service of their country, despite all the myriad problems that come with dealing with the bureaucracy.

"Sometimes in one's life, one should spend some time in the public service," said Mr Jonan, who came to his job in 2009 and has made customer satisfaction one of his main missions - a concept that had never been a priority of the state.

Over at Garuda, Mr Satar's serious attention to safety issues and his financial skills have helped transform the carrier into a world-class airline, flying 17 million passengers a year and boasting a fleet that will have almost doubled to 154 planes by 2015.

At this year's Skytrax World Airline Awards, Garuda was voted the best economy-class carrier, beating such high-quality players as Singapore Airlines. It also moved from 11th to eighth among the world's top airlines.

A career banker, Mr Satar was brought in as vice-president for finance to play a key role in Garuda's restructuring between 2001 and 2003. Two years later, he was plucked from a senior position in Bank Danamon to become the carrier's youngest-ever CEO.

"I had stock options, a good salary and a great banking career and I was giving up that to join an airline going south," he told one interviewer. "My friends thought I was crazy."

Much of the credit for his recruitment goes to then-State Enterprises Minister Sofyan Djalil, a broad-minded US-educated lawyer who saw the value of hiring private sector expertise to rejuvenate loss-making state entities.

Mr Djalil had the support of maverick former vice-president Jusuf Kalla, the businessman-turned- politician whose proactive style and aggressive decision-making was in stark contrast to President Susilo Bambang Yudhoyono's administration.

Mr Satar designated his first two years in the job as a survival and rehabilitation period, returning 10 leased Boeing 737s and lopping off nine non-profitable destinations.

By 2008, he had entered what he termed the "turnaround phase". He hasn't looked back.

A Jakarta primary school classmate of US President Barack Obama, Mr Satar has a simple philosophy:

"If Indonesians don't help the country, who will? Garuda is an Indonesian icon. If it improves, the country's image improves."

Mr Jonan talks the same game. An international relations graduate from the Fletcher School of Law and Diplomacy, he has focused his attention on improving services and cleaning up railway stations since he came to the job from Citi Group.

Look no further than central Jakarta's once-chaotic Gambir station, which has undergone a dramatic facelift and now serves only executive class, long-distance trains to Yogyakarta and Surabaya.

In ridding the cluttered Gambir of commuter trains, he requires passengers to show identity cards, and has banned nontravellers from the platforms.

Given his budget constraints and a serious shortage of technical and commercial expertise, burnishing the "hospitality spirit", as he calls it, is the one area where he can make a difference and put the long-neglected Kereta Api back on track.

"He's helping the politics of rail," said Australian rail consultantBrian Bock, who has spent 35 years in the industry. "He's seen that without political support, he can't go to the next step."

That's where customer satisfaction comes in.

If anyone knows about politics, it is the stylish Ms Agustiawan, who was given control of Pertamina's upstream division in 2006 after a career working for Mobil oil company and services giant Halliburton.

A graduate of the Bandung Institute of Technology, her appointment as president-director in 2009 took many by surprise. But most in the industry agree that she has generally done a fine job in what was always going to be a difficult environment.

Perhaps Ms Agustiawan's biggest achievement was acquiring BP's North-west Java concession and recruiting the oil giant's highly trained team to go on managing the offshore block. The result: an increase in output from 29,000 to 41,000 barrels a day.

Pertamina has also taken a controlling interest in Kodeco's under- performing West Madura field off East Java, but it had to fight off local governments seeking to share in an oil concession it hopes to eventually restore from 13,000 to 22,000 barrels a day.

The company's biggest growth opportunity, however, lies in securing an interest in East Kalimantan's gas-producing Mahakam block when Total E&P Indonesie's production-sharing contract expires in 2017. But it also represents a huge political conundrum.

Although Ms Agustiawan favours Total being involved in future operations, she also has to deal with the growing influence of short-sighted economic nationalists who see nothing wrong with nudging Total out into the cold.

"Pertamina wants to be a world-class company, but resolving the problem of stabbing people in the back to gain control of a resource is a significant issue for her," said one industry executive.

After all, whether it is Ms Agustiawan, Mr Jonan or Mr Satar, private sector executives have a much keener appreciation of foreign expertise, shareholder concerns - and what turns off investment faster than anything.