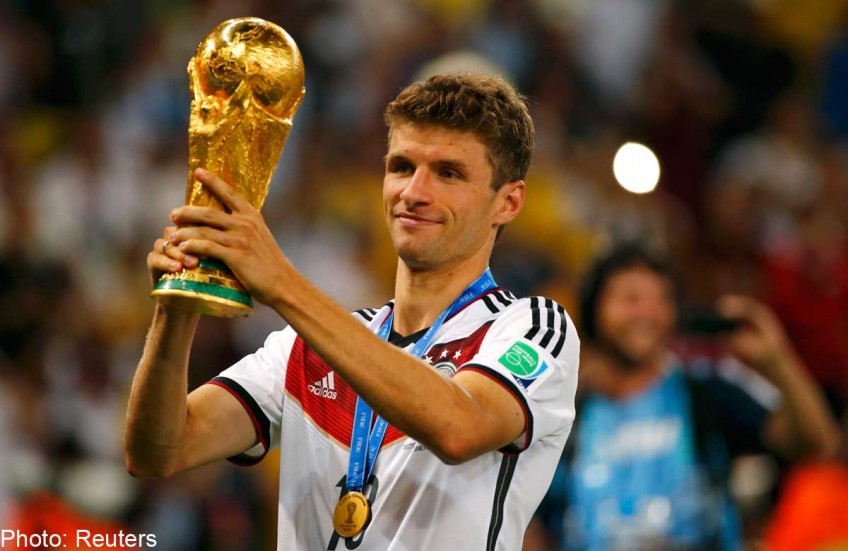 Germany's Thomas Mueller holds up the trophy after winning the 2014 World Cup final between Germany and Argentina at the Maracana stadium.

After clinching their fourth World Cup, do you see Germany going on to rule world football the way Spain did?

PARKER: It sure looks that way.

When you look at their strength in depth, their youth and overall quality, it's all pointing towards that direction.

Mario Goetze came on as a substitute to win the final for them. That was a finish worthy of winning the greatest prize, surely.

You look at Julian Draxler, a fantastic young talent, but had to be content with just one substitute appearance in the tournament - against Brazil in the last four.

They have a very good goalkeeper in Manuel Neuer. Mats Hummels had a fantastic campaign. The team have the mental strength too.

On top of that, they have the flexibility to play any kind of football.

Perhaps all they need now is to find an out-and-out-striker to replace Miroslav Klose.

Do you think Germany deserved their triumph in Brazil?

It's fair they won.

They were the better side in the final. They delivered when it mattered. They were the most consistent team in the knockout stages. Holland fell by the wayside.

You could also say Germany peaked at the right time. They started the tournament brightly with the 4-0 trouncing of Portugal, then went through a blip.

But when they got Bastian Schweinsteiger and Sami Khedira back to full fitness, Philipp Lahm restored as right back, and Per Mertesacker removed from the starting backline, they looked in total control.

The two best teams in this tournament were Germany and Colombia.

So, it's just, that Germany won.

What were some of the other things that caught your eye about Germany?

They have been very good in the final third of the field.

Mesut Oezil was singled out for criticism throughout the campaign, but he played extremely well yesterday morning.

But there are other factors too.

The World Cup is a sprint, not a marathon.

Teams have to make decisions quickly.

England kidded themselves by believing they did okay despite losing the first game, and found themselves eliminated by the second match. Germany made the changes, regardless of win, lose or draw.

Did Argentina finally pay the price for being too defensive?

There was nothing going for them in the final third, they were just relying on counter-attacks.

They had no creativity. Their system wasn't designed to win, just to go out there to hang on to a result.

They counted on only one man - Lionel Messi.

Even if Angel di Maria had played in the final, it would not have made a difference.

Were you surprised by how poor Messi was?

He had to do too much on his own.

Sometimes, he got a little too selfish but, you couldn't blame him because he would have looked around and realised that he didn't have many options.

He needed help, but received none.

The villain for Argentina was Gonzalo Higuain, who missed that early chance to put Argentina in the lead.

He panicked, even though he had plenty of time on the ball.

It was a horrific finish.