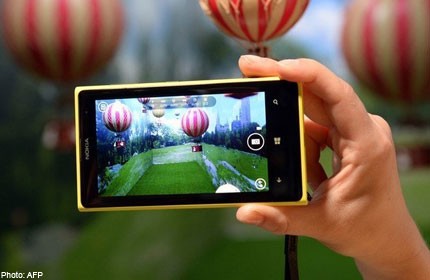 In unveiling the new device in New York, Nokia said its Lumia 1020 smartphone "is able to produce some of the sharpest images possible by any digital camera."

"We want to take people on a journey from capturing pictures to recording and sharing their lives," said Stephen Elop, president and chief executive.

"The Nokia Lumia 1020 will bring new meaning to pictures and continues to strengthen Nokia's leadership in imaging."

The phone, which will be sold in the US market this month and in Europe and China in the coming weeks, features a new photo application designed for professional quality images.

Using a feature called dual capture, the phone 1020 simultaneously takes a high-resolution 38-megapixel image for editing opportunities, and a five-megapixel picture that is easy to share on social networks, Nokia said.

"But the company must still overcome incumbent rivals, slow adoption of Windows Phone and a modest marketing budget if it is to finally help the company turn a financial corner after its recent time in the doldrums," Cripps added.

Daniel Gleeson at IHS had a similar view.

"The Lumia 1020 will act as a halo product to boost Nokia's brand appeal," he said, but "will not ship sufficient volumes to turn around the company's fortunes on its own."

Nokia has seen its past glory fade under pressure of competition from Apple and Asian mobile phone makers.

Microsoft and Nokia joined forces about two years ago in an alliance aimed at making inroads with handsets powered by Windows Phone software.

Windows, boosted by the Windows Phone 8 introduced last year, boosted its US market share to 5.6 per cent from 3.8 per cent, according to a recent Kantar Worldpanel ComTech survey.

IHS said Nokia's global smartphone market share is likely to slip to around three per cent this year.