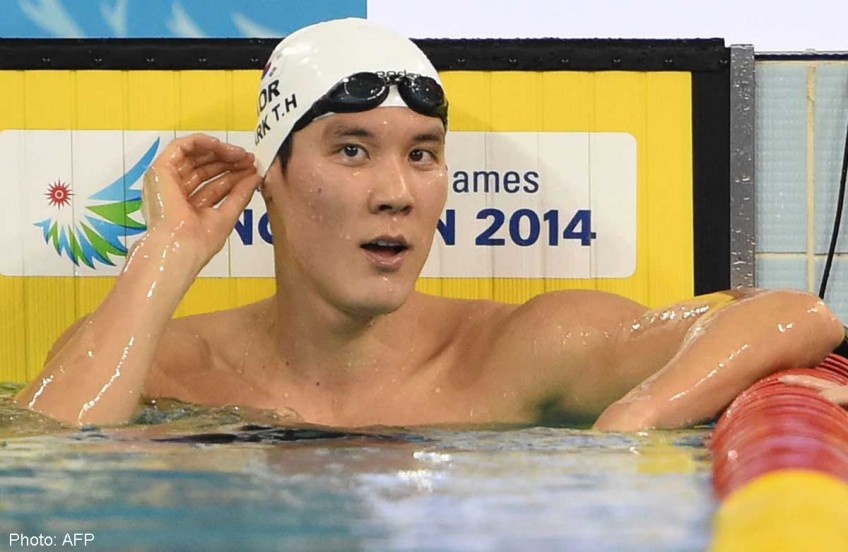 SEOUL - The 18-month suspension handed to South Korea's four-time Olympic swimming medallist Park Tae-Hwan for failing a dope test could see him miss the 2016 Olympic Games, even though the ban ends before the Rio event.

A Korean Olympic Committee (KOC) official confirmed Tuesday that Park, a national icon in South Korea, could fall foul of a new rule barring any athlete suspended for doping from competing with the national team for a period of three years.

"Should the rule be applied as it is, Park would be unable to take part in next year's Olympic Games," the official, who declined to be identified, told AFP.

The rule, instituted by the KOC last July, states that the three-year ban on representing South Korea in competition begins on the date the doping suspension expires.

Park's 18-month ban was handed down by world swimming body FINA on Monday.

The 25-year-old swimmer, known as "Marine Boy" in South Korea, tested positive for a banned anabolic steroid at an out-of-competition control before the Asian Games on September 3 last year.

The ban for his first doping violation will run until March 2, 2016 which rules him out of this year's world championships in Kazan, Russia from July 17 to August 2, but should have allowed him to compete at the Rio Olympics.

The KOC official stressed the three-year rule had yet to be tested and added that the committee had not taken any position on whether it should be applied to Park.

"There is always room for flexibility," he said.

Park has 21 days to appeal against the FINA suspension with the Court of Arbitration for Sport (CAS), although FINA executive director Cornel Marculescu told AFP he did not expect the swimmer to challenge the decision.

All Park's results after September 3, 2014, have also been cancelled which means handing back the three bronze medals he won at last year's Asian Games in Incheon, Korea.

The positive test sent shock waves through the sport in South Korea where prosecutors last month announced charges against a doctor for giving Park an injection without disclosing it contained the banned steroid testosterone.

Park blamed the injection -- administered last July -- for the positive drug test on urine samples he provided in September.

But Park, who began swimming aged five in a bid to control his asthma, has struggled to repeat that form and failed to win a title at his home Asian Games in September, competing in a pool that bore his name.